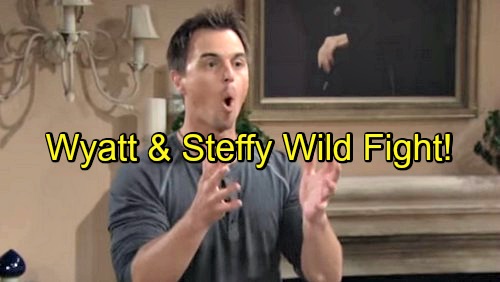 The Bold and the Beautiful (B&B) spoilers for Wednesday’s episode, August 24, tease that Eric (John McCook) will try to reassure Quinn (Rena Sofer). He’ll insist that there’s a place for Quinn in his life and he has no intention of letting his family get to him. Quinn will be pleased that Eric is standing by her, but she’ll hate that she’s the source of so much tension.

Eric might hint that they should focus on their love and forget about the naysayers. It doesn’t matter what the Forresters think as long as Eric and Quinn are happy. Meanwhile, Ridge (Thorsten Kaye) will want to stop Quinn from causing any more damage. He’ll hold a quick meeting about the future of Forrester Creations.

Wednesday’s B&B preview video shows Ridge saying, “We have to limit the influence that Dad has over the company and all of us.” It’s clear that Ridge is a man with a plan. He’s not backing down and Eric isn’t either. The Bold and the Beautiful spoilers say Eric will continue to fight for Quinn. If anyone tries to take Quinn out of his house, Eric will bring her right back.

While Eric handles the Forrester drama, Quinn will face off with Wyatt (Darin Brooks). Now that Steffy (Jacqueline MacInnes Wood) has moved out, Wyatt is absolutely livid. He’ll feel like Quinn is betraying him through her relationship with Eric.

Quinn understands why Steffy isn’t on board with their romance, but she doesn’t think her beef is a good enough reason to give everything up. The Bold and the Beautiful fans know that Quinn has spent years putting her son first. She feels like this is her chance for some personal joy.

Wyatt and Quinn will get into a major shouting match. Quinn will ask why she can’t have a little happiness. Wyatt will contend that happiness leads to boredom for his mother. He may believe Quinn’s relationship with Eric will eventually fizzle, but it could be too late for his own marriage by then.

At Thomas’ (Pierson Fode) loft, he’ll help Steffy get settled in. She’ll become his new roomie while she tries to sort things out. Thomas will ask Steffy some tough questions about her feelings. He’ll try to get to the bottom of what Steffy truly wants.

Thomas will mention Quinn’s mansion takeover. It’s currently causing Steffy’s marriage to crumble, but is this really the end? Thomas will wonder what happens if Quinn leaves Eric. Will Steffy move back in with Wyatt? Steffy will suggest that’s one way it could go, but she won’t seem committed to sharing a life with Wyatt anymore.

Perhaps Steffy is starting to realize that Quinn is always going to cause trouble. If it wasn’t this, it’d be something else. Steffy may want to distance herself from Wyatt to get away from Quinn once and for all. Of course, Steffy’s love for Liam (Scott Clifton) will also be a factor in her decision.

Thomas will do a bit of matchmaking and hope that it all works out. We’ll give you updates as other news emerges. Stay tuned to B&B and don’t forget to check CDL often for the latest Bold and the Beautiful spoilers, updates and news.