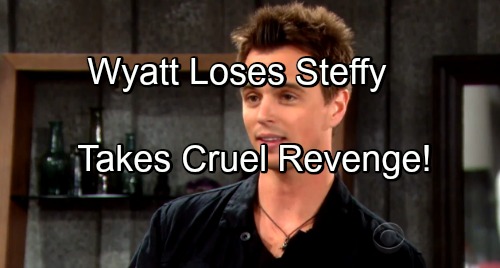 The Bold and the Beautiful (B&B) spoilers tease that Wyatt (Darin Brooks) could spiral out of control. Quinn (Rena Sofer) helped Wyatt get his dream woman, but now her actions have left his marriage hanging by a thread. If Steffy (Jacqueline MacInnes Wood) moves forward with the divorce, a dark side of Wyatt may emerge.

At the moment, Wyatt is simply in panic mode. He’s doing everything he can to keep Steffy, but that plan may fail. Steffy has been in love with Liam (Scott Clifton) throughout her entire relationship with Wyatt. This so-called last straw could simply be an excuse to break things off.

Steffy tried to make it work, but she’s wanted out of this marriage since Liam returned. Quinn didn’t play fair and that was tough for Steffy to accept. She feels like she never got the chance to choose who she wanted to be with. Steffy seems convinced that Liam is the man she was meant for.

The Bold and the Beautiful spoilers suggest that the end of Wyatt and Steffy’s marriage could indeed be in sight. If so, what will Wyatt do? After he’s lost everything, someone will obviously have to pay. In fact, several people could be on Wyatt’s revenge list.
B&B spoilers hint that Wyatt will take a cue from his crazy mom soon. Quinn is impulsive and often destructive. Once Quinn gets an idea in her head, there’s no stopping her. Wyatt may begin to embrace that side of his personality.

When you pair that with the typical Spencer goal of achieving money and power, Wyatt could really go in an interesting direction. The Bold and the Beautiful could take Wyatt to a super shady level we haven’t seen before. Wyatt could determine that vengeance is necessary if he’s going to move on.

Of course, Steffy and Liam would be targets after their inevitable reunion. Wyatt might decide that if he can’t have Steffy, Liam can’t have her either. A sabotage plot could eventually be in play. Who knows? Maybe Ivy (Ashleigh Brewer) could join in on that.

As for Quinn, Wyatt might have something big in store. He could even try to give Quinn a taste of her own medicine. Quinn clearly deserves a good dose of retribution.

It might be satisfying if Wyatt held Quinn captive and made Eric (John McCook) think she was done with him. Quinn would see just how much pain she caused when she kidnapped Liam. Most B&B fans agree that Quinn still needs to be punished.

It would be even more entertaining if Wyatt managed to bring in another love interest for Eric while Quinn was out of the picture. There aren’t a lot of options for Eric right now, but it’s a fun thought. Quinn needs to learn her lesson and losing Eric might be the only way.

Wyatt may not choose that exact route, but you can bet that he’ll resort to extreme measures. When revenge is the motivation, it’s anyone’s guess how far a character will go. We’ll give you updates on Wyatt’s scheme and the bad news to follow. Stay tuned and don’t forget to check CDL often for the latest Bold and the Beautiful spoilers, updates and news.