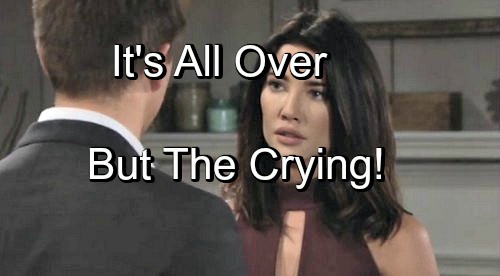 The Bold and the Beautiful (B&B) spoilers for Tuesday, August 23, tease that Wyatt (Darin Brooks) will try to reverse Steffy’s (Jacqueline MacInnes Wood) decision. Since Quinn (Rena Sofer) isn’t backing down, Steffy feels like she has no choice but to move out of the beach house. She just can’t put up with Quinn’s antics any longer.

Wyatt will declare that he won’t let Steffy walk out that door. He’ll beg Steffy to stay so they can figure all of this out. Steffy will counter that she can’t risk Quinn being in her life. Quinn has already caused so much damage. If Steffy sticks around, she’s afraid things will just keep getting worse.

Wyatt won’t understand why Steffy is making him pay for his mother’s mistakes. The Bold and the Beautiful spoilers say Wyatt will hope to show Steffy how committed he is to their marriage. He’ll want Steffy to comprehend how much he loves and supports her.

Tuesday’s B&B preview video shows Wyatt shouting, “I’m not Quinn Fuller’s son right now! I am your husband! I am 100 percent dedicated to YOU!” Steffy won’t look particularly impressed by Wyatt’s passionate speech. She needs actions, not words. If Wyatt wants to keep Steffy, he’ll need to step up his game.

Wyatt will insist that it won’t be a problem. He can prove just how deep his feelings run by making a bold move. Wyatt tried pleading for changes from his mom and he even tossed around a few threats. Since none of that worked, perhaps it’s time for Wyatt to truly cut Quinn out of his life.

Whatever the case, Wyatt will have a total meltdown during his next visit with Quinn. It’s clear that Wyatt isn’t happy about what his mother is costing him. Meanwhile, Steffy will prepare to relocate. She knows Wyatt isn’t going to come through for her. Steffy will eventually seek refuge from the drama at Thomas’ (Pierson Fode) loft.

Speaking of Thomas, he’ll have a conversation with Liam (Scott Clifton) about Quinn and the fallout of her schemes. Thomas won’t think Wyatt has done his job as Steffy’s spouse. He’ll rant that Wyatt was supposed to protect Steffy from Quinn. Now Quinn is moving in with Eric (John McCook) and she’s way too close for comfort.

Liam will agree that this isn’t a good situation for Steffy. The Bold and the Beautiful spoilers suggest that Thomas will try to help Liam win the competition for Steffy’s affection. Quinn has already done most of the work. Steffy is at odds with Wyatt, which means pushing her toward Liam shouldn’t be too difficult.

Thomas will hope he can convince Steffy to follow her heart. He can tell that Steffy loves Liam deep down. Will Liam and Steffy finally get back together or will an unexpected obstacle hinder their reunion? We’ll give you updates as more news comes in. Stay tuned to B&B and don’t forget to check CDL often for the latest Bold and the Beautiful spoilers, updates and news