The Mysteries of Laura Recap – “The Mystery of the Unwelcome Houseguest”: Season 2 Episode 11 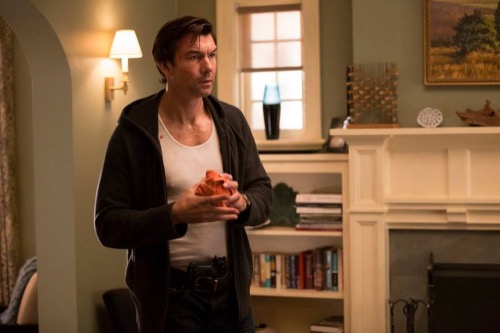 Tonight on NBC The Mysteries of Laura continues with an all new Wednesday January 20, season 2 episode 11 called, “The Mystery of the Unwelcome Houseguest” and we have your weekly recap below. On tonight’s episode Laura’s (Debra Messing) life is in danger, so she fights to survive and defeat a killer as the murder case of perfume mogul Michael Dunham takes a shocking turn.

On the last episode, a perfume mogul was killed in a savage manner and the investigation yields no prime suspect. Meanwhile, Laura and Jake were at odds when they tried to define the current state of their relationship. Did you watch the last episode? If you missed it, we have a full and detailed recap right here for you.

On tonight’s episode as per the NBC synopsis, “a stunning development leaves Laura (Debra Messing) in mortal danger and makes it clear that the murder case of Michael Dunham is far from resolved. It’s a race against the clock as Laura fights to save her own life and take down a killer.”

We will be blogging The Mysteries of Laura season 2 episode 11 with all the up-to-the-minute details at 8PM EST so make sure to come back to this spot and watch the show with us. Make sure to refresh often so you get the most current info! In the meantime, sound out in the comments and let us know what you think of the series so far.

The supposedly dead Jon Dunham somehow managed to take Laura hostage on tonight’s all new episode of “The Mysteries of Laura”.

Jon had apparently realized that someone had set him but unfortunately he had assumed it was the NYPD. So he had gone over to Laura’s house after the explosion at Belle Reve to confront her. He wanted to know how much money she had taken to set him up.

Only Laura isn’t a cop on the take and she never was. However, Laura had initially chosen to ignore the obvious and believe that Jon had merely become unhinged by everything he had done. Meaning she still thought that he had killed his father but that he was also looking for ways to escape the inevitable verdict. And therefore she tried to buy herself some time with him.

Laura got her kids out of the kids of the house without them being aware of the gunmen and then she called in sick at work. Which was usual for her yet understandable after the fight she had with Jake. So Laura made sure that weren’t disturbed and she wanted to keep that way until she could talk Jon down.

She had this idea where she could make him think he’s winning then he would ultimately go one the run. But once she realized that he wasn’t just looking for someone to blame, it got her thinking. What if? What if he wasn’t the murderer? And if he wasn’t then who was?

So Laura made it her business to get through to Jon that she hadn’t set him as part of some grand plan to make herself look good. Though he also had a reason to claim innocence. He mentioned the one thing that she had been doubting since they found their smoking gun. He said that he would never have put a lab coat drenched in his own father’s blood in the ducts.

The ducts are the most important part of the lab. If anything were to go wrong with it, then the many scientists that work in the lab would automatically pick up on it. Much like Laura did. She herself had realized something was wrong with the ventilation system the second she walked in.

Therefore, Jon had a point when he said only someone wanting to frame him would have conjured up fake evidence and put it there.

And so Laura did come to believe that Jon hadn’t murdered his father. Yet the second Jon realized the cops hadn’t been setting him up, he figured that he had nothing to lose and had become intent on killing himself. Either with the gun he had brought or the bomb he had already set the timer on.

So Laura had to convince him to not do anything stupid. And as they got to talking, he told her about what he had done when he was kid that his father had covered up. It seems he had hit a family one night after he had been drinking and a father, mother, and son had all died on impact. But rather than let his son take responsibility, he had the family lawyer make everything go away.

And later that incident became the changing point in Jon’s relationship with his father. In fact, he had told Laura that he thinks that’s when his father stopped trusting him and began to see him as some sort of screw-up that was beyond help. So Laura told him that she empathizes with him. She too has a rough relationship with her dad.

Elsewhere, though, Jake had finally got her emergency call. Earlier Laura had told the nanny that she had eaten bad claims the night before and that it had made her sick. And so when Jake needed to speak with Laura but was not getting her – he contacted their nanny who relayed Laura’s story. Not knowing that Laura doesn’t eat claims. As in ever!

So Jake did pick up on the hints and quickly realized where Jon Dunham must have been hiding. The police had though that Jon had probably left the country by time but Laura’s albeit late message had once again granted them the opportunity to capture Jon. And that’s why Santiani wanted to do everything by the book.

She had wanted to send in a team and Jake had ignored her in order to go rescue Laura. But by time he showed, Laura had been talking Jon down and he would have put his gun away on his own. So Jake’s arrival had made Jon speed up his bomb. And it also forced Laura into acting.

Jake took Jon down and Laura threw the bomb into her washing machine. With the overall of her house sustaining some injury.

But after Jon was arrested, Laura finally put everything together and realized who did kill Michael Dunham. And as it turns out it was Jon’s assistant.

Ellen Sutter used to be Ellen Markelz. And once she had a family but then her mother, father, and brother all died in the same accident that had been covered up by the Dunham family. So Ellen wanted to get revenge on Michael for paying everyone and his son Jon for being behind the wheel that day. And she had nearly gotten away with it.

Yet Laura tricked her into divulging where the murder weapon was and that had sealed her fate. Therefore, Jon is still going to jail but not for his father’s murder.