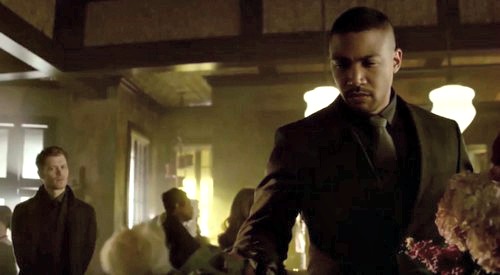 “The Originals” spoilers for Season 3 Episode 21 “Give ‘Em Hell Kid” shows no rest for the wicked. Freya Mikaelson (Riley Voelkel) is plagued by visions that even though Lucien Castle (Andrew Lees) is now dust, just as he said, the prophecy is still in play.

Freya discovers that a new enemy is coming for her family, but she need not look too far away for the source of the danger. Marcel Gerard (Charles M Davis) is beyond furious that Freya sacrificed Davina Claire (Danielle Campbell) and now, not only is she dead, but her soul was splintered.

There’s a wake taking place – could be Camille O’Connell’s (Leah Pipes) or could be Davina’s. Maybe the Mikaelsons got a group rate based on all the deaths lately… Marcel shows and is not happy to see Klaus Mikaelson (Joseph Morgan) there paying his respects.

Kol Mikaelson (Nathaniel Buzolic) comes to have a chat with Freya about the horrible thing she did to Davina. Freya feels bad for Kol that he lost the love of his life, but she’s unapologetic about saving the family from Lucien’s revenge scheme.

Marcel is ready to make them all pay and the ancestors will also be held accountable for what they’ve done. Klaus is reeling from the death of both Davina and Cami – and for he and Kol losing their women -and takes Elijah Mikaelson (Daniel Gillies) to task.

Klaus doesn’t think that Elijah should have sacrificed Davina but Elijah, like Freya, is unapologetic about making the hard choices he thinks were necessary. Freya warns Elijah that Marcel has the super-serum that would make him a creature like Lucien.

Freya tells Elijah if Marcel evolves, she won’t be able to stop him – the deal she did with Davina was a one-shot. Marcel tells Josh Rosza (Steven Krueger) about his revenge scheme and Josh is astonished that Marcel would go that far and put them all at risk.

But remember, not only does Marcel have a tube of super-vampire juice, but he’s also got the army of the Strix behind him. Marcel tells Klaus that he’s nothing to him anymore and Elijah agrees that he and Klaus betrayed Marcel so his anger is justified.

Elijah says their actions have made Marcel a “very dangerous monster” but will he take the serum? And remember, Lucien had a draught of original blood that came from a powerful spell. What Marcel has is venom extracted from Cami.

If Marcel downs the dose, will he become like Lucien or something else entirely? Kol and Vincent Griffith (Yusuf Gatewood) are also on a revenge quest and want to make the ancestors pay for their hellish punishment of Davina.

Kol and Vincent tap Detective Kinney (Jason Dohring) to help them access the ancestral world to put a stop to the witchery from beyond the grave. Will Kara Nguyen (Joyce Brew) bear the brunt of their anger and can they get the cursed jewel from her so she can’t shatter another soul?