‘The Originals’ Spoilers Season 4: The Return of Klaroline – Klaus and Caroline Finally Reunite In New Orleans 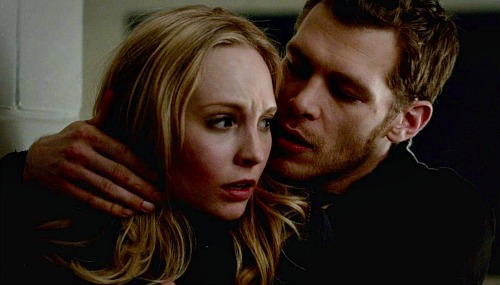 With ‘The Vampire Diaries’ series finale in sight ‘The Originals’ season 4 spoilers have fans of both CW vampire shows wondering what happens next. One of TVD’s favorite couple’s was Klaus Mikaelson [Joseph Morgan] and Caroline Forbes [Candice King]. Could there be a Klaroline reunion in the works?

Caroline and Klaus had a love/hate relationship for several seasons of ‘The Vampire Diaries.’ Caroline’s first love was Tyler Lockwood [Michael Trevino], one of Klaus’s many enemies.

Klaus banished Tyler from Mystic Falls, killed Tyler’s mother and seduced Caroline. But Klaroline wasn’t meant to be – not in Mystic Falls anyway. Klaus fled to New Orleans and season 1 of ‘The Originals’ begins.

A phone call from Klaus Mikaelson to Caroline Forbes hinted that fans haven’t seen the last of Klaroline. “Caroline, I’m standing in one of my favorite places in the world surrounded by food, music, art, culture, and all I could think about is how much I want to show it to you. Maybe one day you’ll let me.”

Klaus returned one more time to Mystic Falls for Caroline’s graduation. Knowing Caroline was still in love with Tyler, the hybrid offered Caroline a graduation gift – Klaus allowed the banished Tyler to return home. “He’s your first love. I intend to be your last. However long it takes.”

Will Caroline leave Mystic Falls during season 8 of TVD and seek out Klaus in New Orleans during season 4 of ‘The Originals’? Klaroline fans would love it, they’ve been begging for the reunion.

Things need to be wrapped up for the series finale of The Vampire Diaries but Caroline could make a few cameo appearances, teasing not only Klaus, which Caroline has done in the past, but also ‘The Originals’ and ‘The Vampire Diaries’ fans.

‘The Originals’ spoilers for season 4 have already revealed there will be a 5 year jump and that Klaus will return to New Orleans in a weakened state.

There’s going to be a battle between Klaus and Marcel [Charles Michael Davis] for the French Quarter. Caroline’s arrival in New Orleans could be just what Klaus needs to gather the strength to reclaim the city he loves.

Sure, fans want Nina Dobrev back for The Vampire Diaries series finale in order to wrap up either her romance with Damon [Ian Somerhalder] or Stefan [Paul Wesley]. TVD fans have been waiting a long time for that to happen.

But Klaroline fans have been waiting a long time, too. Four seasons of ‘The Originals,’ in fact. Executive producer of both shows Julie Plec can’t leave ‘The Originals’ fans hanging. Get Nina Dobrev back for season 8 of TVD, and reunite Klaus Mikaelson and Caroline Forbes for season 4 of ‘The Originals.’ Is that asking too much?

The view is stunning #cwsdcc