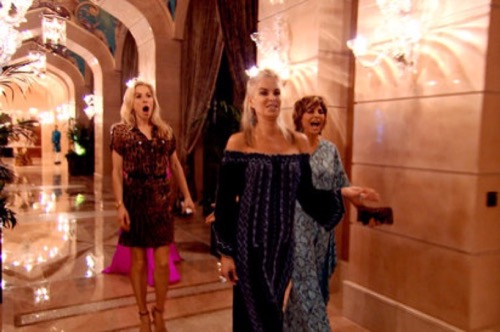 Tonight on Bravo The Real Housewives of Beverly Hills airs with an all new Tuesday, March 22, season 6 episode 17 called, “Lymes in the Sand,” and we have your recap below. On tonight’s episode at a glittering gala in New York, Yolanda receives a Lyme disease awareness award, which erases any doubts Kyle had about Yolanda’s illness.

On the last episode, the women supported Camille’s cancer charity by shopping for diamonds; Lisa Vanderpump rallied her friends for a march; Lisa Rinna admitted to having trust issues; some of the women head to New York in Erika’s private jet for Yolanda’s Lyme disease gala. Did you watch the last episode? If you missed it we have a full and detailed recap right here for you.

On tonight’s episode per the Bravo synopsis “at a glittering gala in New York, Yolanda receives a Lyme disease awareness award, which erases any doubts Kyle had about Yolanda’s illness. Days later, the women travel to Dubai and attempt to live in a culture where they must dress modestly and not curse.

After marveling at the city and their unbelievably over-the-top hotel rooms, the ladies gather for an evening full of doubts from Lisa Rinna, who did not attend the Lyme gala”

This week on The Real Housewives of Beverly Hills Yolanda is getting ready for the event for Lyme Disease. She is nervous and says “I haven’t worn make up in the last eleven months. Her daughter tells her “You look beautiful,” and takes some candid pictures of her. When they arrive at the Gala Yolanda comments that “Everyone who is here is important to me and I want them to know that.”

Ericka is blown away by the Gala and says “I hope to learn more about Lyme Disease and what these people go through.” They show a video of an actual Lyme Disease survivor. Ericka says “I feel bad about being the one to bring up the issue of Munchhausen Syndrome, especially after hearing the stores of all of these people.” Yolanda’s daughter introduces her and Yolanda gets up and thanks her children and husband for their support. She also mentions that Anwar and Bella, her two youngest children were diagnosed with Chronic Lyme Disease as well. Ericka says “Had Lisa R been able to attend she would have seen more than one person saying the same things about the disease and maybe that would put some of her doubts to rest.” Ericka also says “Had I known then what I know now I never would have let that conversation to continue..” Ericka and Yolanda have an emotional conversation after the event and Ericka apologizes to her. Yolanda says “Finally she gets it and that’s all I wanted was for the women to understand what I have been through.”

Back in LA Lisa V is hanging out with her son. She asks him what is going on and Max says “Same old thing.” She gives him a gift of a new car for working so hard at Booth and keeping things together. Max is so excited that he doesn’t know what to say. Lisa says “I gave my children something I didn’t have. I tell them I love you and I never had that.”

Eileen is preparing for Dubai. She is both excited and scared. Lisa R has gone shopping and she and Harry discuss how much she spent. She tells him “I need clothes for five days and five nights.” Eileen and Lisa are talking to their husbands about the schedules for their families while they are gone. Lisa tells Harry to make sure that he knows where the kids are at all times and to have them check in every three hours.

Ericka is packing for Dubai. She tells her stylist “I’m thinking we should be glamorous, but appropriate.” Ericka is taking her glam squad with her so that she doesn’t “look like a hag,” and because “They go wherever I go because that’s how I roll.” Her hairdresser asks her “Do the ladies know we are coming?” Ericka tells them of course not. She also says “You guys will be traveling commercial.” They ask her “We won’t be going with you?”

Kyle is the first to arrive at the airport. She asks the attendant how long a flight it is and he tells her “It is 14 hours from Atlanta to Dubai.” Ericka, Lisa and Eileen all arrive next and the ladies are all excited about the trip. They are laughing and joking on the plane.

When they get to Atlanta they get off the commercial flight and on to a private plane bound for Dubai. When Lisa V sees that there are cars waiting to take them from one plane to the other she says “This is perfect because we don’t have to deal with the hassle at the airport.” When they arrive in Dubai Kyle reveals that there are four rooms. Two single suites and two rooms that can fit two people. Lisa and Eileen decide to take the two individual suites leaving the others to choose who they want to room with.Ericka says “I don’t mind sharng a room with Katheryn. We have managed to put our differences aside.”

Yolanda and her husband have managed to finally sell their house. Yolanda decides they will only take the things that they need to the new house.She says is “Happy to be getting a new start with her husband and her children.”

The ladies get to the hotel and are absolutely blown away by the opulence of the hotel. They are even more stunned when they see the size of the rooms they will be staying in.

Yolanda is packing up her house to move when Brandi arrives to help her out. Yolanda says “Brandi has been consistent throughout this Lyme Disease journey and I really do appreciate her.” Brandi and Yolanda are talking about Lisa R. Yolanda tells Brandi that Lisa was upset that she had gone out to lunch with her. Yolanda tells Brandi “She told people that I have Munchausen’s Disease.” Brandi is shocked and says “Well Kyle said it best when she said they like to prey on the weak. They went after Kim because she had her problems and now they are coming after you because you’re sick.”

In Dubai the women are still blown away by the suites. In Lisa V and Kyle’s room there is a pool table and Eileen has a beautiful full wall fish tank. Katheryn says “I nevur expected to stay somewhere this nice.” The ladies change into these beautiful, flowing outfits Lisa V says “I love the feeling of being free and letting it all hang out. Just call me MuMu Lisa from now on because I will be wearing these all the time.”

The ladies meet up for their first dinner in Dubai and everyone is complimenting everyone’s outfits. Kyle asks the ladies how their rooms are and everyone exclaims that they are “Beautiful.” Kyle presents everyone with gifts of new dresses and all of the ladies love them.

As they sit down to dinner Lisa V asks Ericka how New York was. Ericka says “It was beautiful.” Ericka tells them that Yolanda made a speech and that it was beautiful. She also tells Lisa “I wish you could have been there. You would have changed your mind.” Lisa tells Ericka “I never doubted that Yolanda was sick. I always thought she used her sickness to manipulate people and get away with stuff.” Ericka tells her “She is sick. Don’t you think she would rather be here with us or watching her daughter dominate fashion week in New York.”

Lisa gets upset because of the relationship between Kim and Yolanda and says “I don’t understand how Kim gets to call herself Yolanda’s friend after calling her daughter an alcoholic, but we can’t sit around and have a conversation about her condition which she has made public.” Lisa also mentions the fact that after Yolanda went to lunch with Brandi and Kim she didn’t come to Ericka’s dinner party.

Eileen asks Ericka how she felt about the dinner. Ericka says “My dinner did not go well and it wasn’t what I wanted for my husband. Lisa and Ericka have a small verbal altercation before Ericka decides to stop arguing and tells the ladies she wants to go look at the view. The ladies join her and toast to the beautiful view.