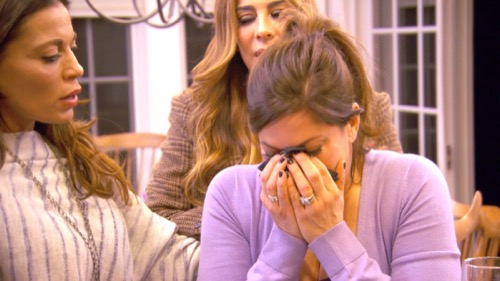 On Bravo TV tonight The Real Housewives Of New Jersey (RHONJ) airs with an all new Sunday, October 2, 2016, episode, and we have your RHONJ recap down below!  On tonight’s RHONJ Season 7 episode 12 called, “The Other “C” Word,” Jacqueline Laurita loses her cool with Teresa Giudice and Melissa Gorga, and Dolores Catania and Siggy Flicker at last reach their breaking point.

Did you miss last week’s episode where the group was off to a white mountaintop resort in Vermont to give Teresa Giudice one last trip before Joe Giudice went to prison and she entered single parenthood?  If you missed it head over to our The Real Housewives of New Jersey (RHONJ) recap of last week, right HERE!

On tonight’s RHONJ episode as per the Bravo synopsis, “It’s the ladies’ second day in Vermont and the group is divided. Siggy Flicker and Dolores Catania try to console Jacqueline Laurita who is still licking her wounds from her fight with Robyn Levy, and Teresa Giudice and Melissa Gorga don’t understand why Jacqueline is playing victim. Later, Jacqueline loses her cool with Teresa and Melissa with words she will never be able to take back.”

This week on Real Housewives of New Jersey, the ladies are still in Vermont. Delores comes into see Joe and Melissa. She talks to them about the situation with Robin and tells her, “I think that you should tell her to leave.” Melissa says, “I think Jacqueline is making a bigger deal out of the situation with Robin than it really is.” Delores tells her, “It is either Robin leaves or Jacqueline leaves.” Melissa says, “Let me go talk to Teresa and see what she wants to do.”

Delores goes back to Jacqueline and tells her about her conversation with Melissa. Jacqueline says, “I love Teresa and I have known her for fifteen years. I just want to protect her.” Jacqueline starts to cry. Melissa goes to Teresa and tells her, “Siggy and Delores came to me and told me that Jacqueline felt threatened by Robin. They said either she left or Jacqueline was going to leave.” Teresa gets really upset and says, “I am not going to ask Robin to leave. Jacqueline instigated the whole incident and she obviously didn’t feel to threatened. She stayed here and they were all here together.”

While the two women are talking, Robin comes in and tells Teresa, “Christina and I are leaving. We want you to enjoy your trip and we’d rather go on another trip that Melissa has planned in May.” Teresa is very upset. She tells Robin “I don’t want you to go.” Robin thanks Melissa for the invitation and tells Teresa that she has had fun, but she has made up her mind and she and Christina are leaving.

Later that night at dinner, Teresa is still upset. She sits down and tells everyone, “We are two short.” Jacqueline looks up and says, “Two short?” Teresa angrily turns to her and says “Yes. we have two less people. Robin and Kelly left because they said that you felt threatened.”

Jacqueline says, “I offered to leave.” An argument ensues between Jacqueline and Teresa and Teresa tries to leave the table. Jacqueline’s husband stops her and says, “Teresa, Jacqueline has known you longer than she has. She loves you. I love you. She was only trying to protect you.” Teresa doesn’t see it that way and is still very angry. She tells Jacqueline, “You instigated a fight with Robin that got out of hand.” Jacqueline tells her, “No one knows how the incident really got started.” Teresa does not believe that at all. Jacqueline is really hurt and upset because she feels like Teresa is taking Robin’s side over hers and using the argument to turn against her.

As the argument continues Jacqueline accuses Teresa of setting her up. Melissa tells her “I don’t like the way that you are coming at her right now. I feel threatened right now.” Jacqueline gets angry and storms out of the restaurant. Her husband follows her. She tells him “I am going home with you.” Back inside the restaurant Siggy tells Teresa “Robin did make the first move toward Jacqueline. She was a bit aggressive. You weren’t there to see the first part of the encounter.” Delores tells her “I think that Jacqueline was looking for someone to tell her that they understood her position and how she felt.” Teresa said “I would have said that to her, but she immediately jumped down my throat.” The argument around the table rages on for awhile. Finally Teresa says “I see Jacqueline for who she really is and I don’t want anything to do with her.”

Outside the restaurant Jacqueline tells her husband “You notice I’m not crying? It’s because I finally see them for the disgusting people that they really are.” He tells her “You finally learned what they are really like and now you can move on.”

Siggy tells Teresa “We are too old for this. This is high school behavior.” She also tells her “I feel bad for my friend. I think she is vulnerable.” Teresa says “I am vulnerable too. I have a lot going on. My husband is going away.” Siggy says “I did say that I was seeing a more vulnerable side to you as well.”

When they return to the house Jacqueline has packed her bags. Siggy asks her “All I want to know is are you ok?” Jacqueline tells her “I am. I could see what they were doing. They were taking the truth and twisting it. They are pretty disgusting people and they don’t deserve me in their lives.” Siggy tells her “Whatever happened to get you to this point I’m glad it happened.”

Siggy is talking to Delores later. She tells her “I am going home. I’m leaving. ” Delores tells her “You can’t make everyone like each other.” Delores understands where Siggy is coming from. Siggy tels her “If Jersey wasn’t eight hours away I’d start walking right now.” Delores tells her “Well we only have one more day together and then we can all go home.” Siggy just sighs.

The next morning Teresa calls her husband Joe and tells him about the arguement between her, Melissa and Jacqueline. She tells him “She called me a criminal and it was completely crazy.” Joe tells her “Forget about Jacqueline. Have fun hanging out with your cousins.” Siggy and Delores wake up. Siggy tells her “I am sore all over from crying.”

Melissa and Teresa are talking about the situation with Jacqueline. Melissa tells her “I don’t feel like I lost a friend. I feel like she never was one.” Teresa says “I don’t want anything to do with her.”

Siggy and Delores are talking in the living room. Siggy tells her “I don’t want to spend time with anyone but you today.” As they are talking Teresa and Melissa come into the room and try to make plans. Siggy tells them “I am not going out with you guys today. I am going home. I have just been through a war and I need to be alone.” Teresa is very upset and tries to convince them to stay. Delores speaks up and tells both Teresa and Melissa “You guys don’t understand how Siggy is feeling right now.We don’t want to be around this right now. We are going home.” Eventually Teresa and Melissa wish them well and head out on their adventure for the day. After they leave Siggy says “You have no idea how glad I am not to be going with them.”

Back in Jersey Jacqueline goes to visit Kathy and Rosie. She tells them about the altercation with Teresa and Melissa. She says “I called Teresa a criminal.” Both Kathy and Rosie look stunned. Jacqueline says to them “We don’t do this nearly enough where we hang out just the three of us.”

Teresa and Melissa are having a great time in Vermont, but Teresa has a break down when she starts talking about Joe’s impending departure to jail. Melissa tells her “You’ll get through this Teresa.” Teresa tells her “I really appreciate your support through all of this.”