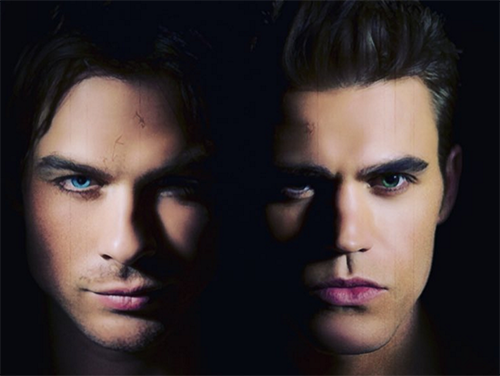 “The Vampire Diaries” may soon be facing cancellation thanks to Nina Dobrev’s untimely exit from her leading role as Elena Gilbert. Does Ian Somerhalder (Damon Salvatore) blame Dobrev for quitting over jealousy at his new wife Nikki Reed?

The show has dropped drastically in ratings since news broke of Dobrev’s departure and once she did leave, ratings for the Elena-less season plummeted. Vampire Diaries now has less than half the viewers it did when Dobrev was starring.

Plus, the move to Friday night is not a good sign – that’s where many shows go to die. While it’s true that some shows thrive on Fridays – Amazing Race, Hawaii-5-0 and Blue Bloods – that time slot is not compatible with the show’s demographic.

The Vampire Diaries relies on a much younger audience than these other shows – and those are teens and young adults that do not sit home on Friday nights watching TV. Did the move to Friday doom Vampire Diaries to cancellation?

Do Somerhalder and his castmates blame Dobrev for leaving them high and dry? Clearly the show is suffering with ratings hovering at about a million viewers per episode compared to three to four million back in the Damon-Elena heyday. The gravy train seems to be coming to a slow, grinding halt.

Did Nina Dobrev quit Vampire Diaries to punish Somerhalder for moving on with Nikki Reed so soon after their split? Or perhaps it was revenge for Somerhalder putting a ring on it and marrying Nikki Reed when he never made a serious commitment to Dobrev. Somerhalder and Reed’s Instagram accounts are like a non-stop in-your-face love fest and that has to chafe the still-single Dobrev. How can it not?

Dobrev claimed she was leaving TVD to focus on film opportunities and it’s true she has landed a few gigs, but the presence of Nikki Reed on the set of The CW vampire show had to rub her the wrong way. Even before Nikki and Ian tied the knot, Nikki moved to Georgia to be with her man.

That meant Nina Dobrev had to see them together constantly when she didn’t have a BF of her own. That could not have been easy and quitting the show would be the perfect revenge. Somerhalder romancing Nikki in front of Nina could end up costing him millions if the show dies as a result.

There’s talk that Vampire Diaries will be cancelled and a few of the actors moved over to The Originals. It makes sense for Caroline (Candice Accola) to transition to The Originals since Klaus (Joseph Morgan) has a thing for her.

And Bonnie (Kat Graham) migrating is also logical, as she’s a witch and The Originals is rife with witch characters and stories. But Damon and Stefan (Paul Wesley) wouldn’t fit since The Originals already has tons of male characters with all the Mikaelson men.

That means Somerhalder may soon be out of a job. Will Nina Dobrev have the last laugh as The Vampire Diaries circles the drain? Did Dobrev quit the show hoping for exactly this outcome and is now seeing her plan come full circle?