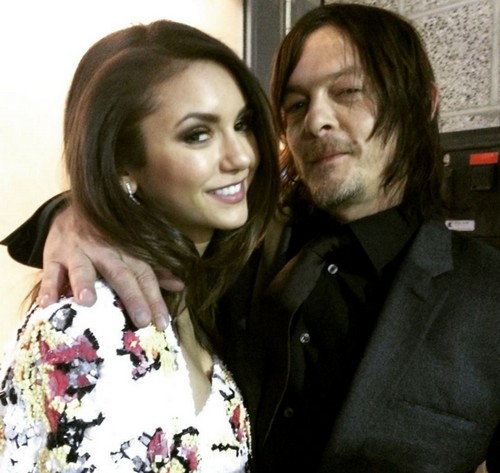 Now that Nina Dobrev and Austin Stowell are over after just seven months of dating  has Nina’s former “The Vampire Diaries” co-star Ian Somerhalder already dumped Nikki Reed? Nina and Ian could be headed for a romantic reunion.

You can’t miss the constant reports that Ian and Nikki have been fighting over whether or not to start a family. At first speculation was that Nikki didn’t want to have a baby because the actress wanted to focus on her career.

Just recently sources started revealing it’s Ian who is reluctant to start a family with Nikki Reed because “The Vampire Diaries” star was hoping for a reunion with former flame Nina.

Ian may just get his wish because Nina and Austin have called it quits. Of course, Dobrev’s and Stowell’s representatives have not yet issued any comments on the couple’s relationship status.

Things appeared to be heating up for Nina and Austin over the Christmas and New Year’s holiday. Stowell met Dobrev’s family when they all spent time together during ski holiday at a pricey chalet. Instagram photos showed the Nina and Austin getting cozy on Christmas Eve. Dobrev even got domestic and baked a cake and other goodies for Stowell.

So what happened? No one knows yet, and if Nina and Austin have split there will probably be the standard old standby about how much Dobrev and Stowell love and respect each other and will remain friends, blah, blah, blah.

But we have we have to wonder, did Nina Dobrev realize she wanted Ian Somerhalder back? And on the career front, did Dobrev realize she hasn’t had much success scoring roles on television or in movies since walking out the door at TVD? Is it possible that Nina is headed back to the CW show and also into Ian’s arms?

If Nikki Reed wants to stay married to Ian Somerhalder than Nina Dobrev’s reported breakup with Austin Stowell must have the “Sleepy Hollow” actress very nervous. Nikki may need to make a desperate move and get pregnant as soon as possible if she wants to hang onto Ian. Or maybe Nikki will be thrilled to be rid of Ian?

“The Vampire Diaries” appears to be tanking since Nina left – CW moved it to a deadly slot on Friday nights. TVD fans have been begging for Nina to come back. This may be just the right time for Dobrev to return – not only to “The Vampire Diaries,” but also to Ian.