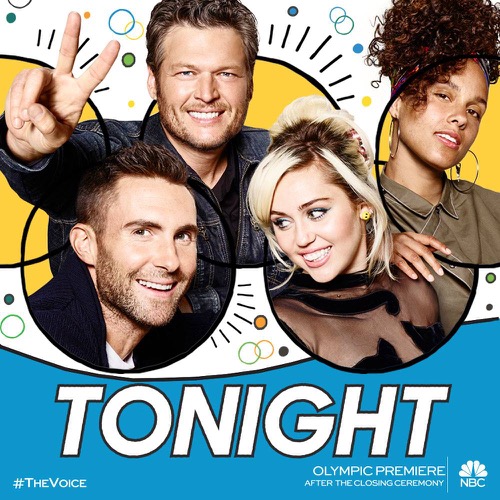 Tonight on NBC the Emmy award winning music competition The Voice continues with an all Sunday, August 21, season 11 premiere called, “Blind Auditions Olympic Premiere,” and we have your The Voice recap below. On tonight’s episode, blind auditions are held in this special Olympics premiere of Season 11.

On the last season finale of “The Voice,” host Carson Daly (“TODAY Show”) revealed who America had chosen to be the winner. Christina Aguilera, Adam Levine, Blake Shelton and Pharrell Williams starred as the celebrity panel of coaches. Who became The Voice this season? Did you watch the last episode? If you missed it we have you covered with a full and detailed The Voice recap right here for you.

On tonight’s episode as per the NBC synopsis, “in this special 30-minute Olympic Premiere of Season 11, the “blind auditions” are held in front of the celebrity panel of musician coaches, including Miley Cyrus, Alicia Keys, Adam Levine and Blake Shelton, who each pick vocalists for their individual teams. The strongest vocalists from across the country compete to be selected by one of the coaches and fight for a chance to win the title of being named “The Voice.”

Tonight’s season 11 premiere is going to be exciting. We’ll have a live The Voice recap right here for you tonight. In the meantime hit up the comments section and tell us your thoughts on season 11 of The Voice so far.

Tonight’s series premiere of The Voice kicks off tonight with this season’s four judges taking their seats in their red chairs. This season’s judges include: Adam Levine, Miley Cyrus, Alicia Keys, and Blake Shelton. The first contestant of the season takes the stage – We McDonald. We

The first contestant of the season takes the stage – We McDonald. We performs a beautiful rendition of “Feeling Good.” It doesn’t take long before the judges’ chairs start turning – Miley Cyrus is the first to hit her buzzer and spin around, followed by Alicia Keys and Blake Shelton, Adam Levine is the last chair to turn.

We McDonald gets a standing ovation from the judges, and they are amazed when they learn that she is only 17 years old. Miley raves about “how strong” her voice is and praises We for being a “total star.” Alicia agrees that We is “Beautiful and perfectly herself.” Blake tells We that he would “do anything to be her coach.”

Alicia Keys tells We to bring her family out on stage with her. Meanwhile, Adam Levine continues to pitch to We and try to convince her to join his team. We takes a moment to decide, and then announces that she has chosen Alicia Keys to be her coach on this season of The Voice.

The next contestant to audition for The Voice is Darby, she performs “Stand By Me.” Carson Daly warns her that it might be a risky decision, but Darby chose the song in honor of her mother, who is helping her pursue her dreams of being a singer.

Darby takes the stage and begins belting out her song, Miley Cyrus is the first to hit her buzzer and spin her chair for the young teen, followed by Alicia Keys, then Blake Shelton. Adam Levine didn’t hit his buzzer.

Miley can’t wait to try and get Darby to join her team. Miley thinks that they have the same voice, and she even gets up on stage to sing “Jolene” with Darby, they actually sound pretty good together. Alicia Keys ups the ante and gets on stage with Darby to sing her hit song “No One” with her. Basically, Bake Shelton doesn’t stand a chance with Darby. After careful consideration, Darby announces that she will be joining Miley Cyrus’s team.

Tonight’s special half-hour sneak peek of The Voice ends with the coaches, Alicia Keys, Miley Cyrus, Blake Shelton, and Adam Levine all performing the hit song “Dream On” on stage together in front of a packed crowd.