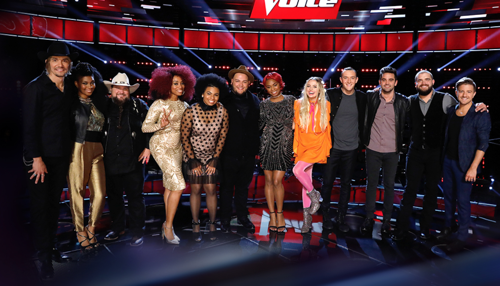 Tonight on NBC’s Emmy Award-winning musical competition The Voice airs with an all new Tuesday, November 15, 2016, season 11 episode 17 and we have The Voice recap right below.  On tonight’s The Voice episode, 1 artists will be sent home and we will have our Top 11.

Did you watch last night’s episode where the top 12 artists performed live in front of coaches Miley Cyrus, Alicia Keys, Adam Levine and Blake Shelton for America’s vote and a chance to move ahead? If you missed the episode and what to find out what happened we have a full and detailed The Voice recap, right here for you!

#VoiceResults starts now. The top 12 will be whittled to top 11 by the end of this episode. Carson has the results but it’ll be a little bit before we find out who’s going home. Carson introduces the judges. Alicia Keys will sing tonight – it’s a song from her new album.

Miley and Adam will perform with their teams and America will have an instant save tonight. The top 12 take the stage. Carson asks We’ about her four-chair turn and coach choice. She says Alicia was the perfect coach for her because their hearts vibed.

Carson reads the names of the first three artists that made it into the final 11. From Team Miley, Ali Caldwell is safe. Also safe from Team Alicia is We’ McDonald. From Team Adam, Brendan Fletcher is safe.

Adam Levine and his artists sing the 60s anthem Stop Children What’s That Sound. Josh, Brendan and Adam play guitar and Billy busts out a great solo in the song. It was remarkable. Carson invites the nine out to get the next set of results.

Carson asks Josh about Adam as a coach and he says he’s introduced him to different styles of music and he thanks Adam for that. America saved, from Team Blake, Courtney Harrell. She seems stunned and relieved. Miley comes to hug her too.

Next we learn that America saved from Team Adam, Billy Gilman. No surprise there at all. Each coach has at least one artist as of now and Adam has two in the final 11 so far. There’s a chance for an Instant Save coming too.

Alicia sings and then surprises

Alicia Keys takes the stage to sing a song from her new album. She does a bit of Blended Family then switches over to Holy War and dedicates it to the current unrest. Adam plays guitar for her with an instrument painted to like the Mexican flag.

Now the seven artists come back to the stage and Carson asks Sundance about Blake pushing him as an artist. He says Blake taught him to believe in himself and says he hopes he touched everyone and says Blake is a wonderful guy.

Carson announces the next person safe is from Team Miley – it’s Darby Walker. Next to find out they’re safe is from Team Blake – it’s Austin Allsup. That means Miley, Blake and Adam all have two now and Alicia has one artist in the top 11.

They have the stage site like a 60s era variety show and they are all dressed like a family of musicians. It’s funky. They sing Dolly Parton’s They’ll Always Be Music. It was really cool. Carson then calls out the five remaining artists so we’ll find out who has to sing for the Instant Save.

Carson asks Christian about a message for his family. He says he tells his mom every day that he loves her and says they support each other even when he was just back on YouTube. Three will be safe and two will sing for their lives.

From Team Alicia, Christian Cuevas is safe. Next safe thanks to America is from Team Adam – it’s Josh Gallagher. All three of Adam’s artists moved on to the top 11 and are safe. From Team Blake, Sundance Head is also safe. That means Blake also had a clean sweep.

Aaron Gibson and Sa’Rayah will sing for America’s Instant Save.

Sa’Rayah sings Rock Steady for her save song. She does a nice job. Alicia says be sure to tweet to save Sa’Rayah and says there is no denying the power and beauty of her voice and anyone with a heart in their chest has to feel that. She tells her to walk in her light.

Next is Aaron Gibson who sings Lego House. He does a great job and Miley says she will work with him no matter what happens and says everyone tweet because he deserves to stay and she wants to hear his growly voice on the stage. She says if you love me, love Aaron and tweet for him.

Sa’Raya thanks Alicia for believing in her and fighting for her. She says she loves her and there’s nothing she can do about it. Aaron says Miley is gracious with her time and he loves when she’s in the room and says she taught him to be himself and he’ll take that with him if he goes.

Alicia tells Sa’Rayah she’s blessed to have been in her presence and to work with her. She calls her phenomenal. Miley thanks Aaron for always performing like an artist, not a competitor. She says she wants everyone to succeed and says he’s that way too.

The #InstantSave went to Aaron Gibson. Sa’Rayah is eliminated. Miley is jubilant and goes to hug him.