‘The Young and the Restless’ Spoilers: Are You on Team Chloe or Team Victor? Vote in Our Poll

BY Heather Hughes on August 6, 2016 | Comments: one comment
Related : Soap Opera, Spoiler, Television, The Young and the Restless 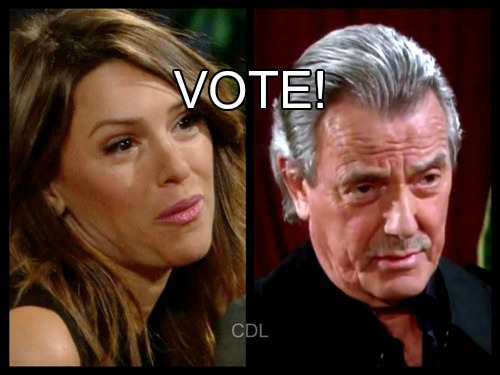 The Young and the Restless (Y&R) spoilers tease that Chloe (Elizabeth Hendrickson) and Victor (Eric Braeden) will continue their little dance. Victor is constantly huffing and puffing like the big bad wolf that he is. Unfortunately, Victor’s scare tactics aren’t working. Chloe has been through a lot and she’s not afraid of a few threats.

Victor thought he was completely in control of this situation, but he didn’t understand who he was dealing with. Chloe is definitely off her rocker. She went rogue and now Victor is trying to clean up the mess.

This partnership is unique and quite entertaining. It’s easy to find reasons to support or oppose each side. Are you on “Team Chloe” or “Team Victor”? Let’s look at their battle from every angle and try to determine which one we should be rooting for.

Victor essentially forced Chloe into this, but at least he made sure Bella (Cali May Kinder) was cared for while her mom was receiving treatment. Plus, Chloe obviously wanted revenge. It’s not like she’s been complaining about taking Adam (Justin Hartley) down. In fact, that’s where things got out of hand.

Victor didn’t actually intend on putting Adam behind bars, but Chloe certainly did. Once she realized Victor was about to make everything fall apart, Chloe made a bold move. Now Chloe is the one in the driver’s seat and Victor doesn’t like it.

It’s kind of nice to see someone else with the edge for a change. Victor isn’t used to people hijacking his plots. He likes to be in charge and it’s pretty satisfying when he’s not. Then again, Victor is finally trying to help his son. Adam is an innocent man and he deserves his freedom.

Since Chloe won’t provide the journal entries, Adam is forced to endure life in prison. He’s spending day after day away from his wife and child. Chelsea (Melissa Claire Egan) and Connor (Gunner and Ryder Gadbois) are suffering greatly thanks to Chloe.

In addition, Chloe is enjoying this just a tad too much. The Young and the Restless fans probably wanted to wipe that smirk right off her face when she emerged from her meeting with Adam. Chloe even moved in with Chelsea and accepted the job she offered. Chelsea is buying all of Chloe’s lies and it’s creating a rift with Adam.

At the same time, having Chloe back on The Young and the Restless has been a barrel of fun. She’s brought some life to a Y&R storyline that would be dull without her. Whether you love Chloe or hate her guts, she’s added an intriguing element.

Even though Delia’s (Sophie Pollono) death was an accident, we can understand why Chloe went off the rails. Losing a child must be unbelievably tough. It’s hard to blame Chloe too much if she’s not really in her right mind.

Of course, Chloe can’t keep this up forever. Almost all soapy secrets come out eventually. We’ll give you updates on when the news will be exposed. Until then, we want to know which side you’re supporting. Are you on “Team Chloe or “Team Victor”? Vote in our Y&R poll and don’t forget to check CDL often for the latest Young and the Restless spoilers, updates and news.