The Young and the Restless (Y&R) Spoilers: Luca Turns On Adam, Decides to Bring Down Victor Himself, Battle Begins 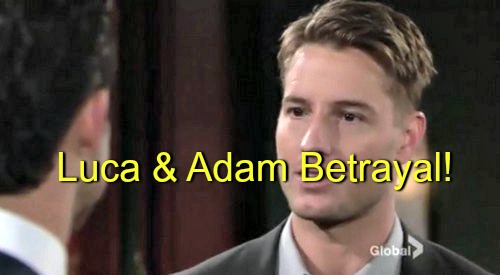 “The Young and the Restless” spoilers tease that Noah (Robert Adamson) will fear he’ll be exposed as the driver who hit Billy (Jason Thompson). Now that Billy’s memory is coming back, Noah will be worried that he’ll put it all together. Luckily, Noah will find a kindred spirit in Adam (Justin Hartley).

Since Adam went through a similar experience when he accidentally hit Delia (Sophie Pollono), he’ll feel a strong connection to Noah and his predicament. “The Young and the Restless” spoilers say Adam will try to protect Noah as the walls close in.

Unfortunately, this situation could soon slip from Adam’s grip. If Billy remembers that Noah was the driver, there won’t be much Adam can do about it.

However, Adam feels he can do something about Luca (Miles Gaston Villanueva). Y&R viewers know that Adam has teamed up with Victor (Eric Braeden) to get rid of the Santoris. They’re letting Luca do most of the work for them by letting him think Adam is on his side.

Nevertheless, Luca may be smarter than Adam gives him credit for. There’s a chance Luca could learn that Adam is deceiving him. Marisa (Sofia Pernas) will beg Chelsea (Melissa Claire Egan) for information in an effort to avert disaster. She knows the trap Adam is setting could mean chaos.

If Marisa gets any hint about what’s going on, she might tip Luca off. Even if she doesn’t, Luca could still have a trick or two up his sleeve.

The animosity between Luca and Adam will start to heat up. By the end of the week, Luca will decide he’s going to bring down Victor himself. Maybe Luca will be tired of the way Adam keeps dragging his feet. Luca might want to take down both Victor and Adam if he can swing it.

Of course, no one can truly topple the force known as Victor Newman. Sooner or later, those who oppose Victor always pay the price. Victor may even foil Luca’s plot before it really begins. Secret attacks have been brewing for weeks, but it sounds like this will turn into an all-out war. Stick with the “The Young and the Restless” for updates on who will rise to the challenge.

So Y&R fans, what do you think about Adam and Noah’s newfound bond? Could Adam’s feud with Luca mean bad news for Noah as well? Will Luca blindside Victor with a sneaky strategy or will Victor see it coming?