The Young and the Restless Spoilers: Nick’s Pairing with Chelsea Establishes First Christian Reveal – How It Goes Down 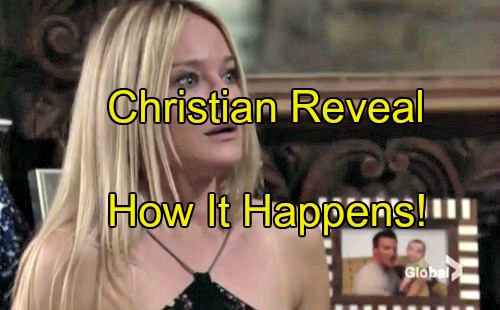 The Young and the Restless (Y&R) Spoilers detailed Christian Newman’s dysfunctional life to-date. Unlawfully taken from his mother at birth and given to Sharon (Sharon Case), of all people, by a vengeful doctor who hated the man people believed is his father.

Adam (Justin Hartley) has distanced himself from his wife in recent weeks. Despondent about being wrongfully imprisoned for murder, he subsequently starved himself, hallucinated, superimposed Victor (Eric Braeden) as a prison guard in his cell and beat the real Walworth employee into a coma.

That indisputable crime and his guilty plea will keep Adam locked up for awhile, which will facilitate the ‘Chick’ power couple. The Young and the Restless spoilers kept readers advised about Nick’s coupling with Chelsea for awhile. Now, here’s how that goes.

Pushing these characters together enables Adam’s wife and the man who’s believed to be Christian’s real father, Nick, to share plenty of screen time. But, the boy who’s currently living with Sharon needs to switch addresses in order to further the ‘He’s not really Sully’ storyline. So, Sharon’s cottage will become key to revealing evidence that will impact many lives in Genoa City.

As readers of The Young and the Restless spoilers know, Sharon was haunted by the terrible events at Fairview, until her subconscious mind finally cleared. It was then that she realized Dr. Anderson (Elizabeth Bogush) orchestrated a faux birth. Sharon then used an unauthorized sample of Nick’s DNA and had a genetic test conducted.

The results naturally appeared to tag Nick as the father of the boy she and Dylan (Steve Burton) named Sully. But, Case’s character can’t be faulted for not knowing that Christian’s father was actually Adam, due to his impulsive, one-time foray with Sage (Kelly Sullivan), and the fact that he and Nick share a parental connection.

Adam previously told Chelsea he was Christian’s father. But, Christian’s apparent death, along with Sage’s, made that point moot and so his wife was very understanding. Chelsea doesn’t know that whenever the evidence Sharon retains in her cottage is exposed that Christian’s custody will revert to his perceived daddy, Nick.

Then, she’ll feel forced to tell Adam that his son is alive, which will establish the second Christian reveal. But, Chelsea’s growing connection will surely complicate that future soapy situation.