‘The Young and the Restless’ Spoilers: Sharon Off Her Meds – Hilary Rats Out Neil to Jack – Ashley Ruins Hookup 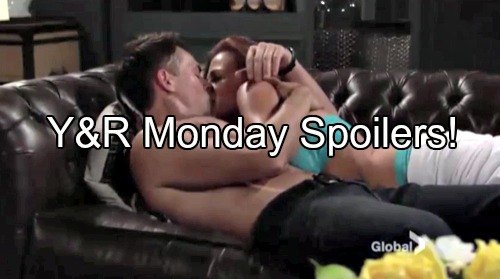 The Young and the Restless (Y&R) spoilers for Monday, June 20, tease that Sharon (Sharon Case) will manage to keep Mariah (Camryn Grimes) quiet. She’ll yell for Mariah to stop when she catches her trying to spill their secret to Kevin (Greg Rikaart). In a private moment, Sharon will insist that this needs to stay between them. Mariah will reluctantly agree.

Afterwards, Sharon will have another nightmare about Sage (Kelly Sullivan). She’ll dream that Sage is taking her baby. Sage will grab Sully and announce that she’s returning him to Nick (Joshua Morrow). Sharon will wake up in a panic and take a look at her medications.

She’ll decide to skip them. Uh-oh. This sounds like it could lead to trouble.

Later, Mariah will meet back up with Kevin at Crimson Lights. She’ll lie about what happened earlier. Mariah will suggest that Sharon is having relationship difficulties. She feels like something is missing. Kevin will understand and vow to keep his mouth shut.

Once Kevin heads off to see Natalie (Mara McCaffray), Mariah will call someone named Dr. Miller. It appears Mariah is taking matters into her own hands when it comes to Sharon’s health. Mariah will leave Dr. Miller a voicemail and hope that they can get in touch soon.

Meanwhile, The Young and the Restless spoilers say Ashley (Eileen Davidson) will make a confession to Jack (Peter Bergman). She’ll admit that Hilary (Mishael Morgan) bribed the lab tech and tried to pin it on Dr. Neville (Michael E. Knight).

Ashley will state that she took the fall to protect Dr. Neville after Hilary blackmailed him. Ash will point out that Hilary uses everyone and she’ll do the same thing to Jack if he lets her.

At the athletic club, Devon (Bryton James) will notice Hilary’s hand tremor and urge her to slow down at work. He’ll want to talk to Jack about it, but Hilary will shut him down. She’ll insist that her work is important to her. They’ll get in a huge shouting match and Devon will leave in a huff.

When Jack shows up, he’ll want to get to the bottom of the Dr. Neville situation. Hilary will claim it was all about protecting someone in her family. Jack will guess that Hilary must know who abducted her. He’ll ask Hilary who did it.

A short time later, Jack will track down Neil and blow up at him for kidnapping Hilary. Neil is really going to feel Jack’s wrath.

Other Young and the Restless spoilers say Ashley will drop by Billy’s (Jason Thompson) place just as he’s trying to get intimate with Phyllis (Gina Tognoni). While Phyllis hides, Ashley will come in for a chat with Billy.

She’ll suggest that Jack is dragging his feet on letting her return to Jabot. Ashley will ponder the idea of turning to Phyllis for assistance.

Billy will agree that it’s a good plan as he tries to rush Ashley off. She’ll take her sweet time, but Billy will eventually get rid of her. Phyllis will wonder what Billy was thinking when he backed up Ashley’s idea. Billy won’t see the harm in letting them team up.

Phyllis won’t want to risk exposure, but Billy will mention that she always takes risks. He’ll think they can keep everything quiet. This partnership could cause problems if Y&R takes this route, but Ashley will have bigger issues to deal with in the meantime.

Near the pool bar, Hilary will inform Ashley and Dr. Neville that she gave Jack updates on her kidnapper. She’ll scold Ashley for putting her in this situation. Hilary will believe she had no choice after Ashley blabbed about the blackmail.

She’ll hope Ashley is happy now. Dr. Neville could end up in the slammer.

Of course, prison is a very real possibility in light of the Michael E. Knight’s departure news. Michael Logan, a TV Guide reporter, recently tweeted that Dr. Neville will be wrapping up his Y&R run soon.

Will the doc land in the slammer or at least leave town in shame? Stay tuned and don’t forget to check CDL often for the latest Young and the Restless spoilers, updates and news.