The Young and the Restless (Y&R) Spoilers: Sofia Pernas NOT Fired as Marisa – Lands New Job on The CW Transylvania 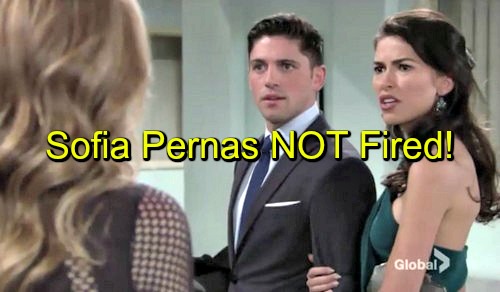 “The Young and The Restless” (Y&R) spoilers reveal it’s been a shocking week for Sofia Pernas. She was cut from the CBS soap due to budget issues but then almost immediately landed a new part on primetime TV at The CW.

Despite the major storyline of Noah Newman (Robert Adamson) proposing to Marisa Sierras (Sofia Pernas) and them working on getting her divorced from Luca Santori (Miles Gaston Villanueva), it looks like that plot is about to die a hasty death with Sofia Pernas’ contract termination.

The Young and the Restless spoilers say this is interesting since Kristoff St John tweeted this week that his storyline has also been slashed and that he will only have a few episodes over the coming months. This makes us wonder if there are other Y&R actors potentially on the chopping block…

Y&R spoilers reveals that Sofia Pernas was notified on Monday, March 14 that her contract was being terminated early – she was fired and Marisa finished – and according to Deadline, she was on a plane almost immediately and within 48 hours had landed her new CW role and was already on set to shoot the pilot.

Sofia Pernas will feature on The CW’s Transylvania which is set in the late 1800s and is in the quasi horror genre. In addition to the obligatory vampires, there will be Dr Frankenstein’s lab assistant Igor. The pilot centers on a young woman’s search for her father after he disappears in Transylvania.

She teams up with a Scotland Yard detective and they end up discovering monsters and villains. Sofia Pernas was a rush recast to replace Amrita Acharia who has a jam-packed schedule of projects according to her IMDB page. Pernas won’t be in the primary role but will play a supporting character.

We congratulate Sofia Pernas on her new role on The CW – which is known for some exceptional shows including Supernatural, The Vampire Diaries, The Originals and superhero shows The Flash and The Arrow plus post-apocalyptic hit The 100.

But what does this mean for the storylines over at Y&R? That effectively puts an end to the Noah-Marisa romance. Since she was cut due to budget, it’s doubtful Pernas will be replaced – Marisa will NOT be recast. Does that mean Robert Adamson’s story arc as Noah could be diminished?

Marisa is also involved with Luca and since portrayer Miles Gaston Villanueva is also new to Y&R, does that mean he’s at risk as well? Stay tuned to CDL for more on Y&R and any further cast cutbacks plus don’t miss our day-ahead “The Young and The Restless” spoilers.

Update: Later in the day on Wednesday, March 16 CBS corrected Deadline’s incorrect report – All of us are relieved to learn that Sofia Pernas is NOT fired from Y&R but was demoted to reccuring status and will continue to appear on the show.

CBS issued a statement saying about Sofia: “She’s recurring and will continue to be seen on the show.”