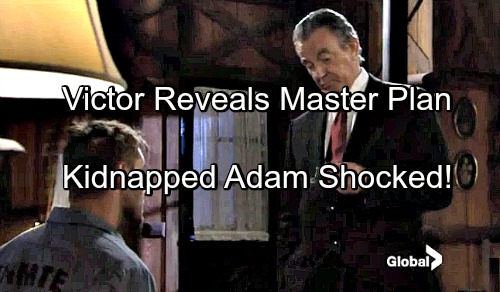 The Young and the Restless (Y&R) spoilers for this weeks new episode on Friday, August 26, tease that Summer (Hunter King) will be angered by her engagement party crasher. Travis (Michael Roark) just showed up and Summer is undoubtedly suspicious. She’ll probably insist that this was her family’s plan all along. Summer will stand by Luca (Miles Gaston Villanueva) and urge Travis to hit the road.

Victoria (Amelia Heinle) will contend that Summer should hear what Travis has to say first. Nick (Joshua Morrow) will back Victoria up. He’ll think Summer should get all the facts before she makes up her mind about Luca. There’s no harm in listening to Travis’ side of the story. It might prove enlightening.

Summer will likely let Travis make his spiel, but she won’t be happy about it. Travis will have his work cut out for him if he intends on convincing Summer of Luca’s guilt. If Travis doesn’t have evidence to back up his claims, it’s difficult to believe that Summer will change her opinion of her fiancé.

Nevertheless, this could cause doubt to creep in. At the very least, Victoria will appreciate what Travis was willing to do for her. As Summer tries to make sense of the situation, Dylan (Steve Burton) will have some suspicions of his own to sort out. He’ll think Chelsea (Melissa Claire Egan) may have had a hand in Adam’s (Justin Hartley) escape from the transport van.

Chelsea will argue that Dylan’s wild ideas are ridiculous. She’ll maintain that she wouldn’t dare make things more difficult for Adam. Chelsea wouldn’t want to take the risk of adding more time to Adam’s stint in the slammer. She wants her husband free at home, not out there living his life as a fugitive.

Dylan won’t be certain that he can take Chelsea’s word for it. He’ll hint that Chelsea might be pulling off one last con to save the man she loves. Chelsea will continue to defend her innocence while Adam faces the real culprit of his kidnapping. Victor (Eric Braeden) is responsible for Adam’s new predicament.

Adam will look perplexed as he sits in front of his father. Victor will give a slight smile as he stands over Adam with a key. The Young and the Restless spoilers say Adam will have a tense chat with Victor about his scheme. Adam may not quite understand how Victor is going to work this out for him.

Y&R fans are probably scratching their heads as well. Fortunately, Victor is a mastermind when it comes to this sort of thing. He’s surely got a grand plan. Can Victor pull off his latest plot? Time will tell, but we’re all anxious to see hear the news Victor has for his son. Stick with the CBS soap for updates on Adam’s future.