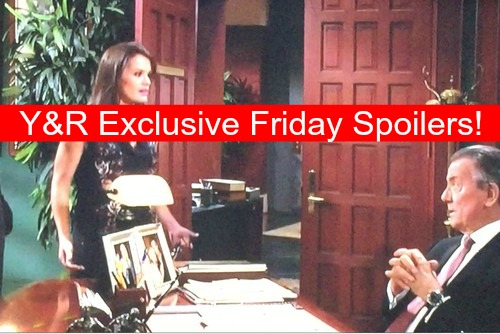 “The Young and the Restless” spoilers for Friday, January 15, tease that Chelsea (Melissa Clare Egan) will get fed up with Victor’s (Eric Braeden) secrets. On any given day, Victor probably has dozens of hidden schemes. However, Chelsea will insist that she needs to know what Adam (Justin Hartley) has gotten himself into.

Adam didn’t show up at the plane and now Chelsea is starting to panic. Chelsea will demand answers, but it’s doubtful Victor will be of much help. It seems Chelsea will have to look elsewhere if she wants to get Adam back safe and sound.

Chelsea will soon ask Paul (Doug Davidson) and Dylan (Steve Burton) for assistance, but she’ll be met with suspicions about the status of her marriage. Chelsea won’t appreciate what they’re implying and she’ll remain determined to get to the bottom of this mystery. One way or another, Chelsea intends to bring Adam home.

Meanwhile, Mariah (Camryn Grimes) will learn that Billy (Jason Thompson) didn’t die when he was taken off life support. Naturally, this puts Kevin (Greg Rikaart) in a tight spot. Mariah will point out that they’re going to be caught in the middle of some major Abbott and Newman drama.

Kevin will undoubtedly agree, but what can he do? The deal is done and now Kevin will likely have to live with the consequences of his decision. If Kevin tries to get out of his agreement, he’ll risk inciting Victor’s wrath. Whatever the case, it sounds like big trouble lies ahead.

Other “Young and the Restless” spoilers say Billy will wake up enough to speak with Victoria (Amelia Heinle). Friday’s Y&R preview video shows Billy softly whispering, “Hey, Vic.” Victoria will be astonished by the news that Billy is really coming back to her. These longtime loves will have a chance to start over and find the happiness they desire.

Of course, this is a soap and that means there’ll be more obstacles eventually. Perhaps Billy and Victoria can finally figure out how to bond through their struggles instead of just calling it quits. Stay tuned for updates on Billy and Victoria’s attempt to try again.