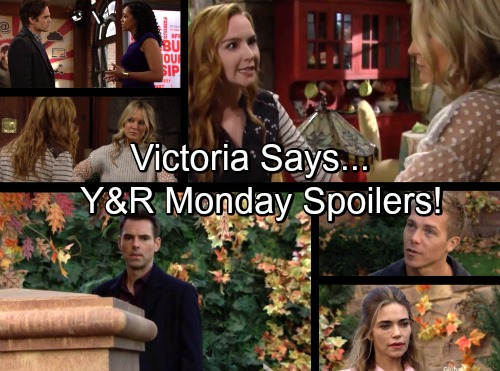 The Young and the Restless (Y&R) spoilers for Monday, November 21, tease that Kevin (Greg Rikaart) will try to discourage Hilary’s (Mishael Morgan) search for answers. Whenever Hilary gets a hot scoop, she just can’t let it go. There are always more layers to uncover and Hilary can’t rest until she’s exposed every last one of them.

Kevin might suggest that Hilary should back off and let the affected families begin to heal. Sharon (Sharon Case) and Dylan (Steve Burton) are devastated now that Nick (Joshua Morrow) has Christian. Of course, Nick has been struggling as well. He’s happy to have his son back, but Sharon’s actions really hurt him.

Nick can’t believe that Sharon was willing to watch him suffer in silence. Plus, there’s plenty of extended family drama. The Newmans are furious with Sharon and that puts Dylan in an awkward position. Kevin feels like everyone is dealing with enough pressure as it is.

Hilary will refuse to give up the other goldmines that might be lurking. Monday’s Y&R preview video shows Hilary declaring, “I’m going to keep digging until I find the truth and I won’t stop until I get the whole story.” If you’re looking for someone who’s determined, look no further than Hilary.

Kevin will be concerned about Mariah’s (Camryn Grimes) role in all of this. He won’t want Hilary to spread the news that Mariah was an accomplice. She was only trying to help Sharon, but it could come back to bite her.

Nevertheless, Mariah will remain in Sharon’s corner. She’ll help her with another problem in Monday’s Young and the Restless episode. After an epic fight on Friday, Sharon tosses Dylan out of the house. Mariah will realize that’s not what Sharon truly wants. She’ll urge Sharon to go find Dylan and apologize.

After all, it’s not Dylan’s fault that Sharon lied for months. It’s not his fault they had to give Christian back to Nick either. Dr. Anderson (Elizabeth Bogush) is largely to blame, but Sharon continued the scheme with vigour. It was already a bad situation, but Sharon made it even worse.

Still, Sharon has been growing frustrated. Although she’s partially responsible, that doesn’t mean she’s without pain. Sharon has faced the same loss as Dylan and they need to stick together. Unfortunately, that’s not going to happen. It appears they’ll make up briefly, but it the peace won’t last long.

Elsewhere, Billy (Jason Thompson) will be appalled by Travis’ (Michael Roark) proposal. As Travis begs Victoria (Amelia Heinle) to say yes, Billy will glare at the dirty cheater. Will Billy say something or hold his tongue? Either way, Victoria and Travis simply aren’t meant to be – at least not permanently.

The Young and the Restless spoilers hint that Victoria and Billy will reunite down the road. Travis hasn’t been entirely honest about the nature of his reconnection with Michelle (Kelly Frye). Perhaps Victoria will break up with Travis once she inevitably hears just how steamy the encounter was.

Y&R fans will want to check out the great scenes ahead. We’ll give you updates as other details emerge. Stay tuned and don’t forget to check CDL often for the latest Young and the Restless spoilers, updates and news. Come join in the live Y&R discussion on our Facebook Page!