The Young and the Restless Spoilers: Victor’s Escape Scheme Gets Adam Out Of GC – Justin Hartley’s Y&R Break Begins 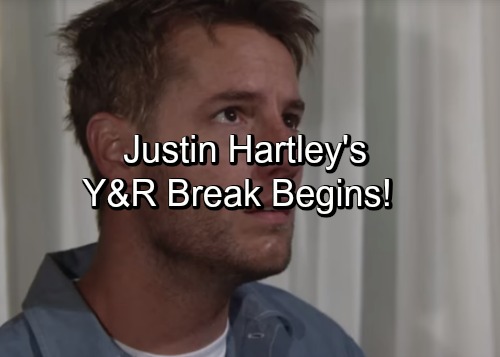 The Young and the Restless (Y&R) Spoilers detailed Victor’s (Eric Braeden) master plan to help Adam (Justin Hartley). The Moustache arranged for his son to escape while being transported from court to the state prison. However, savvy fans also know that this storyline enables Justin Hartley to take a soap break.

Hartley previously announced that work on his soon-to-debut NBC series, This Is Us, was going to require a break from his Y&R schedule. As that hyped prime time show gets set to premiere after The Voice this fall, fans were left wondering what that meant for Adam Newman?

Now, Victor’s scheme has been shown, which furthers fictional and real life narratives. The plot opening created by this latest arc is smart, as it allows fictional leverage for the character and the actor being referenced.

The Young and the Restless Spoilers can’t fully project whether Justin Hartley will definitely leave CBS’ top-rated steamer. Neither the decision-makers at Y&R, nor Hartley, knows whether This Is Us will be a hit. If it isn’t, Hartley almost certainly returns to the set and continues living inside Adam’s skin. However, if NBC’s series is a success, Hartley will have a decision to make.

Fans of The Young and the Restless spoilers will be waiting for the next trigger point. That will be when NBC makes its call about Hartley’s show. A renewal for a second season wouldn’t necessarily mean that the current Adam departs, as Hartley could opt to remain in the cast. However, this assumes that Y&R would want a part-time player.

This particular character is a key Genoa City resident. And, everyone knows that the highly-spirited publicity generated by the open transition from Michael Muhney to Hartley greatly impacted the show two years ago.

While any subsequent recast wouldn’t likely spark that level of controversy, asking fans to accept yet another Adam wouldn’t be easy. So, this fluid situation will remain a major consideration for Y&R during the next handful of months.