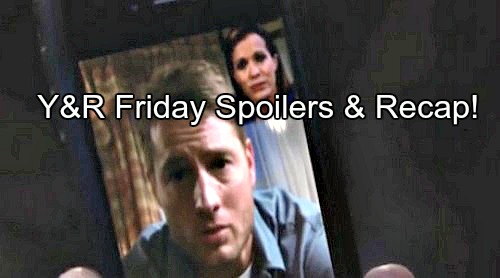 The Young and the Restless (Y&R) spoilers for Friday, August 26, tease that Victor (Eric Braeden) will have an apology to make. At a secluded cabin, Victor will confess that he took his revenge scheme too far. He’ll offer Adam (Justin Hartley) the chance for a fresh start.

Adam will be given a phone and Victor will tell him that a call will be coming in shortly. He’ll suggest that Adam needs to make a powerful pitch to Chelsea (Melissa Claire Egan). Victor will clutch his son’s shoulder and Adam will gently touch his father’s hand. The Newman men will share a warm moment.

Meanwhile, Dylan (Steve Burton) will think Chelsea may have pulled off one last con to help the man she loves. Chelsea will shoot down the idea and Chloe (Elizabeth Hendrickson) will scold Dylan for his intimidation tactics. Dylan will hear the news that the drugged guards were found, but Adam and the van still haven’t turned up.

When Kevin (Greg Rikaart) hints that this plot was carried out perfectly, Dylan will agree that it certainly seems Victor-ish. At Top of the Tower, Travis (Michael Roark) will inform Summer (Hunter King) that Luca (Miles Gaston Villanueva) was the sabotage mastermind. He’ll mention the call he got a few days ago.

Luca will insist that he just wanted Travis to turn himself in. Travis will scoff at Luca’s latest lie and maintain that this sneaky Santori was behind the oil crisis. Noah (Robert Adamson) will urge Summer to listen to what Travis is telling her. Daniel (Michael Graziadei) will also think it’s wise to consider the possibility that it’s true.

Summer will call all of them liars and stomp off with Luca on her arm. At home, Luca will state that they need to get away from Summer’s family and marry somewhere else. Summer will think it’s odd that Luca doesn’t want to prove his innocence. She’ll question why Luca lied to her about not being able to get in touch with Travis.

After some intense grilling, Luca will admit that Travis was right. He sabotaged Newman’s oil rigs, but he’ll assure Summer that he only wants a future with her now. Summer will threaten to call the cops herself if Luca doesn’t give them a confession. Luca will suggest that he’ll just make a break for it.

Summer will grab her phone and a struggle will ensue. Jack (Peter Bergman) will show up just in time for their phone wrestling match. At the ranch, Nikki (Melody Thomas Scott) will defend Victor when Dylan storms in with accusations. Once Victor appears, Nikki will leave to see Chelsea and Connor (Gunner and Ryder Gadbois).

Victor will play dumb about Adam’s whereabouts, but Dylan won’t buy it. He’ll think Victor might even have Adam hidden in his home. Dylan will place Victor under house arrest so that he won’t bolt while they look around.

The Young and the Restless spoilers indicate that Nikki will do her part to help with Victor’s plot. At the penthouse, Nikki will notice the officers standing by the door. She’ll approach Chelsea and whisper that she’s given Connor a phone with a number programmed in it. Chelsea will be instructed to call the number when she has a moment to herself.

Upstairs, Chelsea will make the call and Adam will pick up. He’ll state that they have the opportunity to be together. Y&R viewers will be anxious to see how the rest of this plan turns out.

Elsewhere, Victoria (Amelia Heinle) and Travis will discuss Summer’s refusal to see Luca’s dark side. Travis will contend that people can get crazy when they’re in love. He’ll point out that he never should’ve let Victoria walk out of his life again. Travis will push for more than just a fantasy of the woman he wants. Victoria and Travis will enjoy a steamy kiss.

Will this “Tricky” romance get derailed? Time will tell, but we have to remember Jill (Jess Walton) has been stirring up trouble. She’s pushing for a Billy (Jason Thompson) and Victoria reunion. Stick with the CBS soap for updates on what’s in store.