The Young and the Restless Spoilers: Innocent Bella Becomes A Pawn in Chloe and Victor’s Vicious Game – Child at Risk 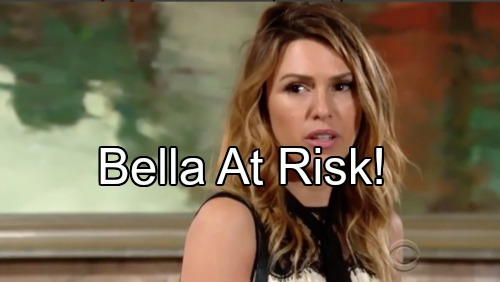 The Young and the Restless (Y&R) Spoilers detailed Chloe’s (Elizabeth Hendrickson) outrageous behavior since she returned to Genoa City. Victor Newman (Eric Braeden) can’t be cited as the leading cause of her actions. Instead, everyone who believes that human beings aren’t robots and therefore have free will, knows that Chloe is directly responsible for jeopardizing Bella’s (Cali May Kinder) future.

It’s understandable that a mother who lost her child would need time to cope. The Young and the Restless spoilers tell us that of course Billy (Jason Thompson) is still reeling from the effects of Delia’s (Sophie Pollono) death as well. But, this edition of The Young and the Restless Spoilers isn’t about him. So, let’s stay focused on Bella’s mommy, rather than one of her potential daddy’s.

Related: What Happens To Sharon After The Christian Reveal?

A healthy woman wouldn’t have stolen Billy’s genetic sample, had herself artificially inseminated, and then pass off that perceived Abbott heir as some “random guy’s” child. Yet, that’s exactly what Chloe has done. Legal consequences, including a custody right’s battle, surely await if Billy is eventually confirmed as Bella’s father. And, that tawdry matter represents just one of the crimes she’s committed within recent years.

In 2016, The Young and the Restless spoilers remind us that Chloe willingly agreed to help Victor Newman frame Adam (Justin Hartley) for murder. How amoral and yet, in her mind, how just. Y&R viewers who have rightfully scorned so many acts the Moustache has committed through the years can’t claim that he forced Chloe to be part of a forgery scheme that put Adam behind bars.

She jumped at the opportunity to settle a score. Yes, Victor is currently threatening to take Bella from her if she doesn’t relinquish Sage’s (Kelly Sullivan) diary pages. But, her daughter wouldn’t have become leverage if she hadn’t purposely maintained a perpetually vindictive stance.

Genoa City history lessons allow savvy Y&R students to know that baby secrets are hard to keep hidden and often produce dramatic consequences for all involved. They also know that those who tangle with Victor often leave the battle with at least one visible scar.

Chloe, like anyone who calls this fictional Wisconsin town her home, was fully aware of both points before she chose to act as she did. And, she’s the leading reason why her daughter’s future is now uncertain.