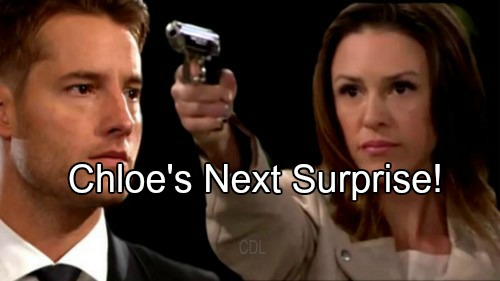 The Young and the Restless (Y&R) spoilers tease that Adam (Justin Hartley) will face a difficult choice on Monday’s episode, July 18. Adam thought he would be able to clear his name if he accepted Victor’s (Eric Braeden) offer. Unfortunately, Chloe (Elizabeth Hendrickson) hijacked that plan.

Now Adam thinks Victor has left him up a creek without a paddle. He fears there’s no way out of this mess. Michael (Christian LeBlanc) will push Adam to take a plea deal and he’ll finally relent. Adam will decide that this is his fate and there’s nothing he can do about.

The Young and the Restless spoilers say Michael will deliver the news of this plea deal to Natalie (Mara McCaffray) and Kevin (Greg Rikaart). They’ll hate the fact that they couldn’t crack the case. Natalie found out Victor’s secret partner wears a wig, but that’s pretty much all they have to go on at this point.

As Adam prepares to lose everything he holds dear, Dylan (Steve Burton) will make a last-ditch effort to save him. He’ll hope that Victor will have a change of heart. Dylan will suggest that Victor needs to pipe up if he cares about his son at all.

It seems Victor may not be willing to talk. By the end of next week’s episodes, Victor will try to secure his own freedom as planned. It sounds like the appeal process will move forward. That may mean Victor will keep his mouth shut about his own guilt.

Meanwhile, Chloe will feel like Adam’s day of reckoning has arrived. She’ll stare at a picture of Delia (Sophie Pollono) and declare that this is a big day. Will Chloe be satisfied if Adam gets a lengthy stint in prison? Could she have something else up her sleeve?

Y&R fans know that Chloe contemplated killing Adam on more than one occasion. She pulled a gun on Adam at Delia’s memorial service. Chloe even made a full-on murder attempt when she ran down Adam in the street outside the courthouse.

In other words, Adam will need to be careful on this “big day.” Chloe may try to make it even bigger and worse than he expects. Of course, there’s always the possibility that Kevin and Natalie will come through for Adam at the last minute.

If they find evidence that links Chloe to the setup, Adam might back out of the plea deal. He could fight to prove his innocence in court. Regardless, Chloe probably isn’t going down for this anytime soon.

Elizabeth Hendrickson is reportedly on contract. She’ll be a major player on The Young and the Restless in the coming months.

Bottom line, we have three people with a lot to lose. Victor, Chloe and Adam all need a solution. Ideally, Y&R would free Adam and get his framers off the hook as well. These characters need to be causing drama in Genoa City instead of sitting in prison cells.

We’ll give you updates as we learn more about this tricky plot. It should be interesting to see what unfolds. Stay tuned and don’t forget to check CDL often for the latest Young and the Restless spoilers, updates and news.