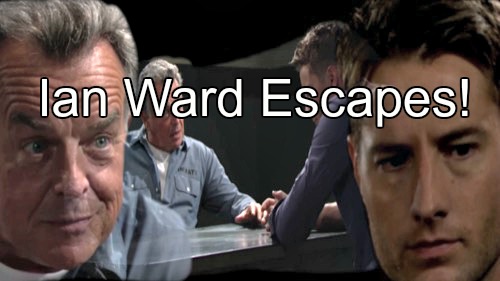 “The Young and the Restless” (Y&R) spoilers tease that Chelsea (Melissa Claire Egan) will have some concerns about Adam’s (Justin Hartley) plan. She was trying to get on board with using Ian Ward (Ray Wise) to their advantage, but now she’s starting to worry about this wild card.

Ian is unpredictable and there’s no guarantee he’ll keep his promises.

The Young and the Restless spoilers say that Chelsea will warn Adam that Ian could be conning them. She’ll think Ian may have his own plan in mind and it definitely won’t involve helping Adam. Of course, Adam won’t feel like they have much of a choice. Ian is Adam’s last resort.

Michael (Christian LeBlanc) is a good lawyer, but they still need something to bolster Adam’s defense. Ian’s testimony against Victor (Eric Braeden) could create reasonable doubt and that’s all Adam can hope for right now. Nevertheless, Adam will understand Chelsea’s point. Ian must have some sort of agenda.

Adam will head back to the state pen to get a few things straight with Ian. He’ll try to get to the bottom of what Ian has in store. “The Young and the Restless” spoilers say Adam will figure out that Ian might be plotting an escape. Ian could easily use his transfer as an opportunity to secure his freedom.

Although Ian won’t admit to anything, Adam will feel certain that Ian intends on making a quick getaway before the trial kicks off. Adam is counting on Ian’s testimony. He might end up behind bars without it. It could mean bad news if Adam can’t change Ian’s mind.

Y&R spoilers reveal that Adam will ask Ian to stick around for the trial. In exchange, Adam will help Ian flee from custody. Needless to say, this is a risky move. Adam could blow everything by assisting Ian. If Adam gets caught, there’s going to be big trouble.

Still, Adam will believe this is the only solution. He’ll help Ian and attempt to keep his involvement under wraps. Unfortunately, nothing ever seems to work out for Adam – at least not permanently.

Even if he gets by with aiding a criminal, Adam will provoke Victor’s wrath through Ian’s testimony. This is a tough situation for Adam and it’s probably just going to get worse. Stick with the CBS soap for updates on Adam’s future and how it will affect his family.