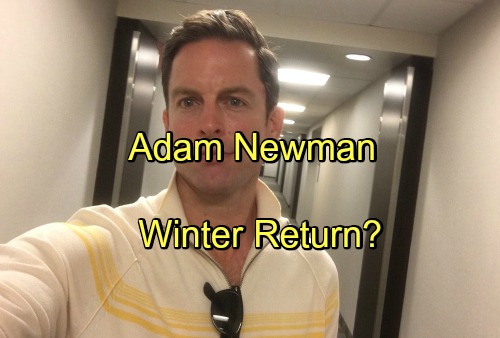 The Young and the Restless spoilers tease that the Adam Newman recast will be a seasonal blessing. But, will fall winds blow a new actor into town, or might fans have to wait for winter to arrive before the fate of this key character is resolved? The success of Justin Hartley’s new prime time television show offers a partial answer.

NBC recently picked up ‘This Is Us’ for full season. So, The Young and the Restless spoilers fans know that Justin Hartley almost certainly won’t be reprising his role within the next handful of months. Considering his shooting schedule for that rival network, Hartley couldn’t to return Y&R until sometime next year.

And, that assumes Justin Hartley would be interested in playing Adam Newman again, instead of resting after a full-year’s efforts on this daytime soap and the new nighttime dramedy in 2016.

At this point it appears likely, if not certain, that Hartley won’t play Adam any time in the near future. Decision-makers at The Young and the Restless may have been allowing time for ‘This Is Us’ to play out before setting a storyline course.

Hartley could have opted, or been enticed, to return to Y&R if his NBC show was canceled. But, thankfully for him, that didn’t happen. Now, his former soap opera employer is fully free to explore a new hire.

A Christmastime Adam return teaser scene would be embraced by Y&R’s audience if executive producer Mal Young and head writer Sally Sussman believe that role should be recast. Past speculation involving a new character named Dean came to light in the recently.

If that fictional person is actually a new Adam in disguise, a return scenario might not be as complex as expected.

The 2014 Michael Muhney-to-Justin Hartley scenario involved a complex facial reconstructive surgery plot. This time around Y&R could simply announce the new actor’s name as Adam Newman and move forward from there – even if that ‘new’ Y&R actor IS Michael Muhney. Of course, a passionate segment of Muhney fans are hoping he returns to the role he owned for more than four years.

Clearly, Michael Muhney’s re-hire would draw major eyeballs to the small screen. Whether that anticipated momentum would translate into an extended ratings bump is unknowable but all evidence from CDL’s Y&R poll research indicates resounding approval for a Michael Muhney return. In fact over 90% of responding Young and Restless fans want Michael back as Adam!

What isn’t debatable is the chance that this could happen, as Muhney previously advised that he was under consideration for re-hire in 2014, before Y&R chose to go with Hartley. But, other solid thespians are capable of taking a sharp turn in Genoa City in Adam’s clothes as well. So, the coming months will tell the tale in this hoped-for character revival.