‘The Young and the Restless’ Spoilers: Adam Throws Chelsea and Connor Out Over Chloe Clash – Phyllis and Victor Team Up 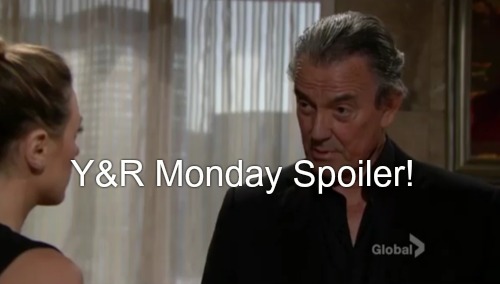 The Young and the Restless (Y&R) spoilers for Monday, August 8, tease that Kevin (Greg Rikaart) will come up with a plan to reunite with Chloe (Elizabeth Hendrickson). He’ll hope that Mariah (Camryn Grimes) can help him out. Mariah obviously has some lingering feelings for Kevin, which means this will be beyond awkward for her. Nevertheless, Mariah will reluctantly agree to do what she can.

When Mariah starts dropping hints at work, Chloe will be firmly against a reunion. She’ll suggest that her relationship with Kevin is in the past. Revisiting it would simply be too painful. Mariah will fill Kevin in on the bad news, but it’s doubtful that he’ll give up.

Other Young and the Restless spoilers state that Victoria (Amelia Heinle) will decide to accept Jill’s (Jess Walton) offer. She’ll be returning to Brash and Sassy. Billy (Jason Thompson) and Victoria will maintain that they’re going to keep things professional. They’ll want Jill to settle down and stop playing matchmaker.

Of course, Y&R viewers know that Jill isn’t the kind of woman who backs off. She’ll track down Phyllis (Gina Tognoni) and urge her to step down from the foundation board. Jill won’t think it’s a good idea for Phyllis to stay on it now that Billy has taken a spot.

Phyllis will want Jill to stop worrying so much about Billy and Victoria’s reunion. If it’s meant to happen, it will. Phyllis will also get some startling updates in Monday’s episode. Summer (Hunter King) will announce her engagement to Luca (Miles Gaston Villanueva).

Phyllis will manage to keep her cool, but she’ll tell Summer to take her time when it comes to wedding plans. There’s no need to rush to the altar. Phyllis is undoubtedly hoping that she can drive these two apart before they tie the knot.

It appears Phyllis could find herself with a surprising ally. Once Victor hears about the engagement, he’ll find Phyllis and insist that they’re working toward the same goal. They both want Luca out of Summer’s life ASAP. Phyllis hates Victor’s guts, but getting rid of Luca has to be the top priority.

Meanwhile, The Young and the Restless spoilers say Adam (Justin Hartley) and Chelsea (Melissa Claire Egan) will clash over Chloe. In prison, Chelsea will indicate that Chloe seems to have ditched her desire for revenge. Adam will contend that Chloe is just as vengeful as ever. He’ll believe that Chloe is the mystery woman they’ve been looking for.

Chelsea and Adam will end up getting in a huge fight over Chloe’s role in the setup. Finally, Adam will suggest that he’ll have to rely on Dylan (Steve Burton) to prove his theory. He’ll feel like Chelsea is siding with Chloe over her own husband. Chelsea will assure Adam that she’s in his corner, but he won’t agree.

Adam will once again refuse to see Connor (Gunner and Ryder Gadbois) while he’s at the state pen. He’ll leave in a huff and Chelsea will be left to sulk. Adam will return to his cell and dream of his freedom. That day will probably come at some point, but Adam still has a long road ahead of him.

Chelsea will grow fearful as Adam pushes her away. It sounds like their marriage could be on the rocks. We’ll keep you posted on what’s in store for this popular pairing. Stay tuned to Y&R and don’t forget to check CDL often for the latest Young and the Restless spoilers, updates and news.