BY Sean O'Brien on August 15, 2016 | Comments: one comment
Related : Soap Opera, Spoiler, Television, The Young and the Restless 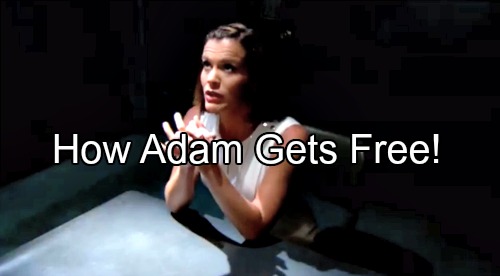 The Young and the Restless (Y&R) spoilers fans are very wise. These seasoned souls know that when characters flash-forward into the future and also reminisce about the past, that a climax within their storylines will soon be forthcoming. In Adam’s (Justin Hartley) case, both figuratively and literal, these developments mean that he’ll soon be released from prison.

Chelsea (Melissa Claire Egan) was recently having memory dreams that mixed good times with bad experiences. Her subconscious reflections combined hopes for Adam’s freedom with ‘Chadam’s’ past Victor Newman (Eric Braden) troubles, of which there were many. She then shared her feelings with Chloe (Elizabeth Hendrickson).

The Young and the Restless spoilers showed that scene weaved nicely into this overall arc, as that perceived best friend is the one who helped Chelsea’s father-in-law frame Victor, Junior.

Poor Adam thinks that he’s stuck in the can indefinitely. Yes, he’s often bent, or even broken, the law in various instances through the years. But, he was never guilty of poisoning Constance Bingham (Sally Kellerman). Yet, fabricated evidence that his father and nemesis, Chloe, concocted resulted in an outrageous murder conviction and 30-year prison sentence.

A series of daytime nightmares have haunted Adam’s sleep during recent Y&R episodes. Bizarre conversations and confrontations with Victor, who morphed into a Walworth employee, have highlighted his sequestered specters. The Young and the Restless spoilers readers surely were amused to see the Moustache in that character stretched prison costume.

At the same time they also knew that Victor was actually working in the real world to obtain needed evidence from Chloe that will help secure his son’s early release.

Victor finally secured Sage’s (Kelly Sullivan) real diary pages after applying pressure for weeks. While he wouldn’t tell Chloe who he was going to setup as the framer, this scheme will lead to the overturn of Adam’s outstanding three-decade sentence. Yes, Y&R used classic soap opera methods to present a combined sequence of key recollections and future projections, which furthers the climax where Adam gains his freedom.