The Young and the Restless Spoilers: Is Travis Crawford Really Gabe Bingham – Wolf in Sheep’s Clothing? 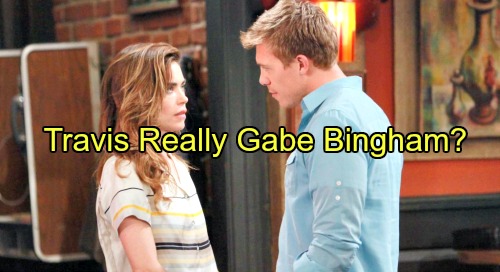 The Young and the Restless (Y&R) spoilers propose to show how Travis could really be another character who Y&R fans have been dying to meet! Travis Crawford (Michael Roark), left town as quickly as he arrived; but his return is coming on this week’s episodes. Travis literally snuck into Genoa City, and introduced as the bartender of the dive bar named “Hank’s Bar”; the bar frequented by Victoria Newman (Amelia Heinle).

Travis sees Victoria crying over the jukebox after a tough day at work and he helps her find her favorite song. She leaves him a tip, but ends up leaving quickly in tears.

The day Sage Newman (Kelly Sullivan) died, Victoria comes back to Hank’s Bar to drown her sorrows. Travis offers her a free drink. When Victoria asks him if he ever gets sick of listening to people’s sob stories, he responds with, “It’s one big country music song. It’s all heartache, jail time and car wrecks.” Victoria introduces herself as just a receptionist who answers phones for rich people all day. Travis reassures her that whatever she is going through will be okay.

We all know that Luca Santori (Miles Gaston Villanueva) has ratted out that Victoria has been escaping her responsibilities to Newman Enterprises by sleeping with the enemy. A man who supposedly is trying to escape his own past. When Travis finds out Victoria is a rich and powerful business woman, he appears to be shocked but it fades quickly, when it is found out that he was a “Wolf on Wall Street.”

Conveniently, Travis ends up having money troubles with his bar and shares with Victoria that all he wants to do is close up the bar and “buy a sailboat and sail around the world.” Victoria thinks about it for a millisecond but declines because of her kids and ex-husband, Billy Abbott (Jason Thompson). Victoria remains in town and even though she agreed to “go steady” with Travis, he leaves to sail around the world but ends up vanishing and no one can locate him.

Here lies the problem, if he was having money troubles, how could he possibly afford to buy a sailboat and travel the world? Where did the money come from that covered his debts and gave him enough to follow his dream?

The Young and the Restless spoilers propose that Travis is really Gabriel Bingham back for revenge. If Travis/Gabe was truly having money trouble, wouldn’t that be one more thing for him to rage about since it was Adam and Sage that made him lose all his inheritance to his grandmother Constance’s favorite charities.

The Young and the Restless spoilers say that this week, we hear Nick Newman (Joshua Morrow) reveal to his father, Victor Newman (Eric Braeden) and Phyllis Abbott (Gina Tognoni) that Luca has been manufacturing evidence to make it look like Travis is the one who has caused all the damage and oil leaks on the rigs.

Victor says he is going to find Travis and bring him back to refute Luca’s allegations. We all know that Victor and Luca are NOT working together, so how is it that in the very next scene you see Luca contacting Travis? How did he know where to find him or how to get a hold of him?

Have any of you thought of the coincidences between Travis and Gabriel Bingham? He arrives just before Sage’s death, so she never would have met him; although if he were to be Gabe, she probably wouldn’t have recognized him because he would have needed plastic surgery, the same as Adam Newman (Justin Hartley) did, as they both were in the car explosion.

When Travis listens to Victoria, and he responds with jail time and car wrecks, it seems a bit odd to say, no? Could this be a possible reference to when Delia was killed, or when he saved Adam from that fiery car crash?

How about Travis’ desire to leave the business world and sail around the world? Do you all remember when Nick was talking to who he thought was Gabe at the time, but it was actually Adam, and he was joking about how they smashed up his grandmother’s sailboat back when they were in boarding school together?

There are far too many apparent coincidences to ignore the possibility that Travis could very well be Gabriel Bingham himself! One more enemy against the Newman family and Newman Enterprises! What do you think about the possibility of Travis being Gabe? Let us know and come back to CDL for all your The Young and the Restless spoilers, updates and news!