The Young and the Restless (Y&R) Spoilers: Billy and Phyllis Cheating Confession – Bribe, Blackmail, and Betrayal 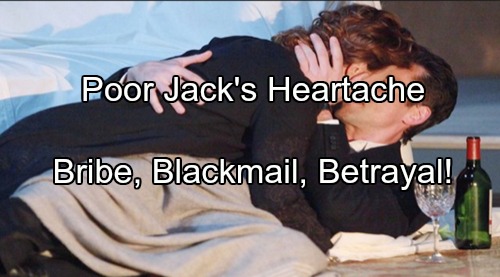 “The Young and the Restless” (Y&R) spoilers tease that Billy (Jason Thompson) will feel like things are getting out of hand on this week’s episodes. Phyllis (Gina Tognoni) and Billy’s affair has led to lie after lie. The motorcycle crash forced them to rev up the deception. Now that Bethany (Chrishell Stause) has been dragged into this mess, it’s out of control.

Billy will approach Phyllis and suggest that it’s time to come clean. “The Young and the Restless” spoilers say Billy will urge Phyllis to tell Jack (Peter Bergman) everything. Phyllis will undoubtedly think that’s a horrible idea. It would crush Jack if he knew Phyllis was cheating on him with his own brother.

Phyllis will likely contend that they covered their tracks. Bethany has agreed to keep her mouth shut thanks to the $10,000 and a shot with Billy. However, Phyllis is dreaming if she thinks that’s all it will take to make Bethany stay in line. Bethany knows she’s in a prime blackmail position. She’d be smart to milk this for all it’s worth.

Bethany could easily demand more money as well as a full-blown romance with Billy. Does Phyllis seriously believe Bethany will just fade into the background with a secret like this? She’s not going anywhere! There’s a good chance that Bethany will take, take, take. Nothing short of Phyllis or Billy’s admission can stop her.

That might be part of why Billy wants to end all of this. Of course, Billy could also be hoping that Jack will leave Phyllis. He’d probably like it if Jack turned away in disgust and broke Phyllis’ heart. Billy could be right there waiting to pick up the pieces.
Nevertheless, it’s doubtful that Phyllis will be making any startling disclosure. That seems just a little too easy. T

his kind of Y&R storyline deserves an epic reveal, not a timid confession. Will “The Young and the Restless” deliver a strong payoff? Stick with the CBS soap to see how the truth will get out and what it will mean for Phyllis’ future with Jack.

So Y&R fans, what do you think about the news that Billy will pressure Phyllis to confess? Will Phyllis argue that it would hurt Jack too much? Will Phyllis really come clean or will Jack get updates in a more shocking way? Voice your opinion in the comments below and don’t forget to check CDL often for the latest “Young and the Restless” spoilers, updates and news.