The Young and the Restless (Y&R) Spoilers: Billy and Phyllis Dig for Dirt on Adam – Expose Truth About Christian Paternity? 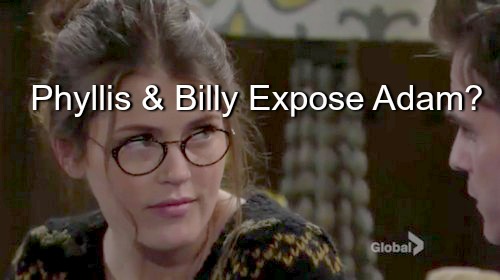 “The Young and the Restless” (Y&R) spoilers tease that Adam (Justin Hartley) will feel the walls closing in. Victor (Eric Braeden) has made it clear that he’s calling the shots. Adam has to go along with all of Victor’s evil plans or he could expose the truth about Christian.

As we’ve seen with the Noah (Robert Adamson) situation, Victor isn’t messing around. If a family member betrays Victor, he won’t hesitate to follow through on his threats. However, Adam will soon be under even more pressure.

“The Young and the Restless” spoilers say Natalie (Mara McCaffray) will decide she can’t go through with Phyllis (Gina Tognoni) and Billy’s (Jason Thompson) plot. Victor will issue a harsh warning and Natalie will cave in. She’ll hand over a working version of the program instead of a flawed one. That will leave Billy and Phyllis in a bit of a bind.

Fortunately, Phyllis isn’t the type of woman who just gives up. She wants revenge more than anything right now. Their scheme is risky, but Billy will be on board with trying a new tactic. Phyllis and Billy will realize that Adam could be their ticket to getting the project back. Adam is Victor’s right-hand man and he could help them turn the tables.

Of course, Adam isn’t going to double-cross Victor without a good reason. There’s too much at stake. That’s exactly what Phyllis and Billy will be counting on. They’ll know there has to be something Victor is using to keep Adam in line. Billy and Phyllis will start digging around in hopes of coming up with some dirt to use against Adam.

Y&R viewers have been waiting patiently on the reveal of a layered secret. We know that Sully is actually Christian. We also know that Adam is the child’s true father. Since the “baby daddy” drama seems to be the hot dirt at the moment, Phyllis and Billy may be in luck. It sounds like they might play a role in the domino effect that’s coming.

Adam could be caught in a tight spot. If Adam goes along with Phyllis and Billy’s demands, he’ll run the risk of inciting Victor’s wrath. If Adam refuses to help them get the program back, they could shout his secret from the rooftops.

There’s just no way Adam can win here. It appears Adam won’t be able to hide his news for much longer. Stick with “The Young and the Restless” for updates on Adam’s struggle to keep things under wraps.

So Y&R fans, what do you think about Billy and Phyllis’ new plan? As they search for dirt on Adam, will they find out he’s Christian’s father? Will this play a part in how everyone discovers the truth about Sully? Voice your opinion in the comments below and don’t forget to check CDL often for the latest “Young and the Restless” spoilers, updates and news.