The Young and the Restless (Y&R) Spoilers: Billy Unconscious After Crash, Phyllis Runs Off – Travis Disgusted by Victoria

BY Heather Hughes on May 31, 2016 | Comments: 5 comments
Related : Soap Opera, Spoiler, Television, The Young and the Restless 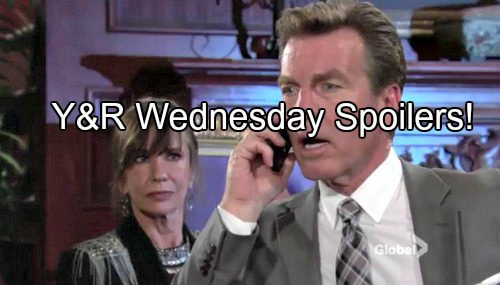 “The Young and the Restless” (Y&R) spoilers for tomorrow’s episode, Wednesday, June 1, tease that the Abbott-Winters Foundation will hold a special event to announce Katherine’s (Jeanne Cooper) wing. Jill (Jess Walton) and Hilary (Mishael Morgan) will be at odds over who’s going to lead the ceremony. Jack (Peter Bergman) will encourage Jill to let Hilary kick things off, but Jill won’t be on board.

She’ll think Hilary needs to butt out and back off.

Phyllis (Gina Tognoni) will rip into Hilary for her constant need to cause trouble. When Jack steps up for Hilary, Y&R spoilers say Phyllis will leave in a huff. Meanwhile, Victoria (Amelia Heinle) will wake up after spending the night on Billy’s (Jason Thompson) couch. Billy will give her updates on Johnny and she’ll be pleased that he’s doing better.

Talk will turn to what happened last night. Billy will state that he’s going to tell Victoria who he’s been sleeping with. He’ll want her to reciprocate, but she’ll brush off the suggestion. Billy will blurt out that Jill caught him with a waitress who used to work at On the Boulevard. The news will irk Victoria. She’ll feel like they were starting to find their footing again, but Billy just wrecked everything.

In Luca’s (Miles Gaston Villanueva) suite, his lackey will get in touch with him with new information. The Young and the Restless spoilers say that Travis’ (Michael Roark) bar is having major financial difficulties. Luca will be intrigued, but he’ll ask his minion to find out more. Summer (Hunter King) will return to Luca after changing clothes for the event.

Before they head downstairs, Y&R spoilers say Summer will ask Luca to move in with her. He’ll happily agree and they’ll tell some of Summer’s family members. Nikki (Melody Thomas Scott) will seem a bit wary, but Summer will insist that she loves Luca. He’ll feel the same way.

When Victoria shows up at Hank’s bar, she’ll hear Travis ranting on the phone. He’ll indicate that he needs $20 grand as he starts raging about the wealthy. Victoria will point out that she has somewhere to be, but she wanted to pop in for a second.

Victoria will arrive at the club to find Neil (Kristoff St. John) making a big announcement. He’ll be serving as the foundation’s first patient. Neil is hoping to get a grip on his drinking and gain a brighter future. Victoria will go over to the podium and share the plan for a $5 million donation. Travis will walk in, hear it and turn right back around.

Other “Young and the Restless” spoilers say Billy and Phyllis will run into each other in the park. Billy will convince Phyllis to take a motorcycle ride with him. They’ll head out, but they’ll quickly encounter a problem. At the club, Jack will inform Jill that there’s been an accident.

Elsewhere, an unconscious Billy will be on the ground next to his crushed motorcycle. Phyllis has already rushed off to avoid getting caught with her lover. This mess is sure to catch up with Phyllis pretty soon. Stick with the CBS soap to see how long Phyllis can keep everything under wraps.