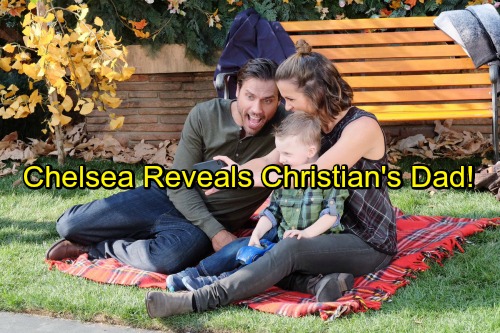 The Young and the Restless spoilers tease that the long-awaited Sully reveal as Christian will soon be coming. Sharon (Sharon Case) holds the first secret, as she knows that the boy she and Dylan (Steve Burton) have been raising is actually Christian.

Chelsea (Melissa Claire Egan) holds the second hidden card. And, when she exposes it lives will change to an even more dramatic extent.

Sage (Kelly Sullivan) and Adam (formerly played by Justin Hartley) reacted impulsively one time due to problems within their relationships. But, one time was all it took on Y&R. Their momentary, memorably angry and energetic encounter created Christian.

But, Sage later presented her delivered baby to Nick (Joshua Morrow), who she claimed as the father. And then Christian apparently died shortly after he was born.

Dr. Sandy Anderson (Elizabeth Bogush) orchestrated a baby-swap scheme, whereby she had a nurse take Christian and give him to Sharon. Sharon, who was deeply drugged at Fairview, was made to believe that she was pregnant and subsequently gave birth to a boy. Patty (Stacy Haiduk) told Sandy that she knew what happened.

Sandy tried to silence Patty. But, Patty acted in self-defense and murdered the bad doctor. Of course the information she retains in her tortured mind is currently mixed into this daytime play and will continue to be moving forward.

Shylan named their first-born Sully in honor of Dylan’s military buddy who was killed in action. Months later, Sharon’s memory cleared and she had a DNA test conducted. Using an unauthorized genetic sample from Nick, Sharon understandably believed that the test results tagged her ex-husband as the father of the boy who was actually Christian.

Sage discovered the truth as well, confronted Sharon, but then died in a terrible car crash.

Nick knew nothing and still knows nothing about Adam’s paternity where Christian was concerned. As The Young and the Restless spoilers fans know, Adam Newman confirmed that he had a second son and shared that information with his wife.

Due to Sage’s untimely death, Chadam decided to maintain this confidence in order to not create further pain for Nick. Since then, Adam is believed by residents of Genoa City to have died.

Sharon will soon be convicted for her moral crime on Y&R. After Sully is revealed as Christian, Chelsea will have a choice to make.

The second reveal secret Chelsea holds is far different than Sharon’s initial lie. How this recent widow plays her card will shape the future of various characters in Genoa City.

SNEAK PEEK: Giant sign in the lobby of the @paleycenter! @CBSDaytime #1for30 museum exhibit opens to the public October 12th pic.twitter.com/vxcAedChQW

Faith is on a mission. Help me Chelsea Lawson Newman, you’re my only hope! #YR @AlyviaAlynLind @MClaireEgan pic.twitter.com/i1M93rjj2q