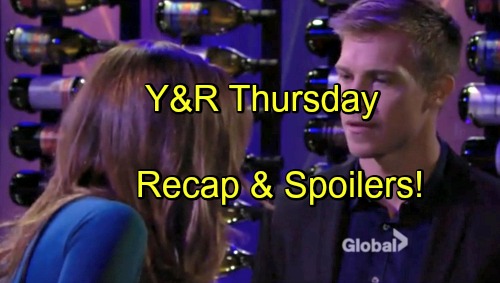 The Young and the Restless (Y&R) spoilers for Thursday, October 6, tease that Mariah (Camryn Grimes) will have to come up with another solution to her problem. She needs to ditch the repairman’s phone, but she won’t be able to leave it at Hank’s bar like she wanted to. A waitress will stop Mariah and remind her to take the phone with her.

Mariah will pick it up and start to head out. Suddenly, Kevin (Greg Rikaart) will appear. He’ll wonder why Mariah is at Hank’s, so she’ll pretend she was meeting a guy. Mariah will suggest that she’s been stood up.

Kevin will say he’s there to look for the repairman’s phone, but he won’t be certain that he can find it. The phone’s off and they can’t track the signal.

Mariah will exit, turn the phone on and toss it in the trash at the park. When Kevin traces the signal, he’ll locate the phone with Dylan (Steve Burton). They’ll believe that someone was hoping they’d discover it.

At Sharon’s (Sharon Case) place, Mariah will promise that she handled it. Sharon will vow to take care of Patty. She’ll be willing to do anything Patty wants if it means keeping her secret safe. Across town, Travis (Michael Roark) will try to keep his own secret under wraps. Ashley (Eileen Davidson) knows about his history and he’ll wonder what she’s going to do about it.

Ashley will admit that she contacted Travis’ ex, Michelle. They’ll go over the story of how Travis left Wall Street. It seems Travis fell for Michelle, who happened to be the boss’ wife. When their affair was exposed, Travis was fired and blackballed. He was forced to leave the business.

Ashley will question Travis’ motives for being with Victoria (Amelia Heinle). She’ll ask if Victoria is Travis’ ticket back to the top. Travis will contend that he’d never use Victoria like that. However, he’ll be concerned that Ashley will use this against him in the Newman and Abbott war.

Later, Travis will sit down to dinner with Nikki (Melody Thomas Scott), Victor (Eric Braeden) and Victoria. When he’s asked about his parents, Travis will state that his mom was a teacher and his dad was a boat salesman. Victor will propose a toast as they celebrate Travis’ first day at Newman.

He’ll talk about how Travis rose to success on Wall Street after he put himself through school.

Once Victor and Nikki head out, Travis will have a confession to make. Victoria will be stunned when Travis spills the whole Michelle story. She’ll determine that Michelle must be the one Travis used to love. All of this is going to cause major strife once Friday’s Y&R episode rolls around.

In the meantime, Nikki will grill Victor about his scheme. She’ll ask if Victor is trying to get Victoria back at Newman by bringing Travis on board. Elsewhere, The Young and the Restless spoilers say Stitch (Sean Carrigan) will mention the moment he knew he had fallen for Abby (Melissa Ordway).

She’ll lie that she had a moment like that as well, but she’ll give Ashley the truth later.

Abby will imply that she never really knew for sure that Stitch was the one. It sounds like this marriage is headed downhill fast. Whatever love they shared is quickly fading. We’ll give you updates as more news comes in. Stick with the CBS soap to see if a divorce is on the way.