The Young and the Restless (Y&R) Spoilers: Chelsea Wants To Flee GC With Adam and Connor – Murder Charge Noose Tightens

BY Heather Hughes on May 23, 2016 | Comments: one comment
Related : Soap Opera, Spoiler, Television, The Young and the Restless 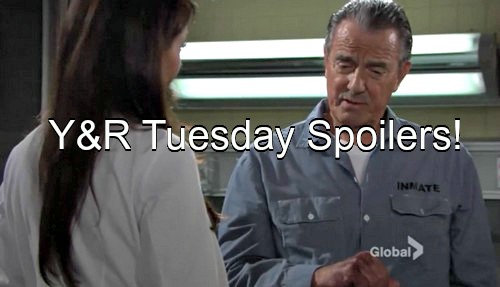 “The Young and the Restless” (Y&R) spoilers for tomorrow’s episode, Tuesday, May 24, tease that Nick (Joshua Morrow) will stop by the state pen to lash out at Victor (Eric Braeden). He’ll accuse Vic of using Sage (Kelly Sullivan) to frame Adam (Justin Hartley). Victor will offer an alternate explanation.

He’ll think Sage never shared her secret because she was protecting Nick from additional pain.

After Nick departs, Victor will confide in Meredith (Alicia Coppola). He’ll give her updates on Nick’s claims and sulk about the confrontation. Victor will suggest that he can’t believe his family would think he’d do something like this.

At the penthouse, Y&R spoilers warn that Chelsea (Melissa Claire Egan) will erupt at Dylan (Steve Burton) for arresting Adam. When Adam and Michael (Christian LeBlanc) walk in, they’ll share that Michael will be reinstated as an attorney before long.

Related: Has Chelsea Made Adam a Wimp? Vote In Our Poll!

Adam will hope that this mess will be sorted out before it comes to any courtroom battle. He’ll assure Dylan that Sage’s journal has been tampered with.

Once Dylan exits, Adam will explain how he foiled Victor’s plan to get out of prison. Michael will listen and admit that this scheme sounds right up Victor’s alley. He’ll want Adam to back off and let him handle Victor. Michael will head to the state pen and attempt to get a confession.

Victor will simply insist that Adam’s undoing will be the result of his own mistakes.

Back with Chelsea and Adam, she’ll feel like they need to take action. Victor obviously wants to take Adam down and he could easily do it. Chelsea will urge Adam to go on the run with her. She’ll think they should leave town with Connor (Gunner and Ryder Gadbois) right away.

Other “Young and the Restless” spoilers say Sharon (Sharon Case) will prepare for Cassie’s (Camryn Grimes) memorial service. Mariah (Camryn Grimes), Sharon and Faith (Alyvia Aly Lind) will have plans to meet up with Nick at the cemetery.

When Mariah encourages Sharon to spill the truth about Sully, Sharon will argue that it will only add to the pain.

Mariah will feel like Nick needs to know and it’s just going to be worse for Sharon if she waits. Later, they’ll join Nick, Summer (Hunter King) and Noah (Robert Adamson) for the ceremony. They’ll all share some heartfelt stories and difficult memories. Nick will wish he still had Sage and Christian there with him. Everyone will offer support on this tough day.

At the athletic club, Mariah will chat with Kevin (Greg Rikaart). He’ll wonder what was bothering her when they ran into each other recently. Mariah will lean in and kiss Kevin. Summer and Noah will be stunned as they watch it unfold from a distance.

An embarrassed Mariah will urge Kevin to forget what she just did.

When Mariah suggests they should watch TV and enjoy some Chinese takeout, Kevin will be on board. He’ll ditch Natalie (Mara McCaffray) to spend time with his ex. Could this lead to more down the road? We’ll have to wait and see, but Y&R buzz suggests a reunion is possible.

Meanwhile, Faith will think Nick should hold Sully. She’ll believe it will make her dad feel better. As Nick takes Sully in his arms, Dylan will confess that it’s killing him to watch this. He’ll feel like Nick deserves to have his son. Little does Dylan know that Nick WILL have his son eventually!

Dylan won’t know if he could go on without Sully in his life. Sharon will look incredibly nervous. How long can Sharon keep her big news under wraps? Stick with the CBS soap to see when this secret will blow.