The Young and the Restless (Y&R) Spoilers: Max’s Future – Escapes Fairview For Revenge or Returns To GC as Rehabilitated Teen?

BY Heather Hughes on May 23, 2016 | Comments: 6 comments
Related : Soap Opera, Spoiler, Television, The Young and the Restless 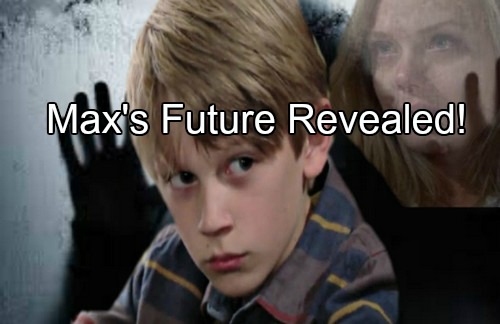 “The Young and the Restless” (Y&R) spoilers tease that Stitch (Sean Carrigan) and Abby (Melissa Ordway) will try to adjust to their new normal. Max (Jared Breeze) turned their world upside down when he tried to murder Abby and killed his unborn sister.

Stitch had a hard time wrapping his head around what his son was capable of, but he finally accepted it and Max is getting some help.

However, Y&R viewers know how smooth Max can be. He was able to pull the wool over almost everyone’s eyes for quite a while. Only Abby initially suspected that Max was to blame for her fall. Max showed no real remorse and that’s the main reason he’s receiving treatment. The doctors told Stitch it wasn’t safe to bring Max home and we have to wonder what’s coming next.

Y&R spoilers ask if  Max will figure out how to say all the right things and secure his release? It’s not hard to believe Max would be capable of beating the system. Besides, Fairview is obviously filled with quacks and we can’t imagine that this youth-based psychiatric facility is much better.

“The Young and the Restless” isn’t known for quality care.

Max appears to be softening a little, but there’s no way we can be certain his attitude updates are genuine. He might start to realize that this place is the pits. Max could claim that he’s so sorry, wants forgiveness, blah, blah, blah…anything to get out of there!

Stitch would be overjoyed by Max’s return, but what if his son’s reign of terror continued? Abby and Stitch’s relationship couldn’t survive another blow. Of course, there’s a possibility that a resourceful kid like Max could pull off an escape.

What if Max broke out and came back on a mission for revenge? He might even be gunning for Stitch if he resents his father for turning on him. It could set up a deadly exit for Stitch if Y&R ever decides to write him out. Poor Abby would have to carry on as a widow!

Then again, Max may stay on track and return home as a reformed teenager in a few years. “The Young and the Restless” could use definitely use some adolescents. Naturally, Max’s issues may always be lurking under the surface.

Bottom line, there’s a lot of story left to tell with Max. The show should consider fully exploring this crazed character. We’ll let you know if we hear any news on Max’s future.

So Y&R fans, what do you think the plan is for Max? Will he truly get help or is more chaos ahead? Could Max dupe his doctors or try to make a break for it? Would you rather see Max come back later as a rehabilitated teen?