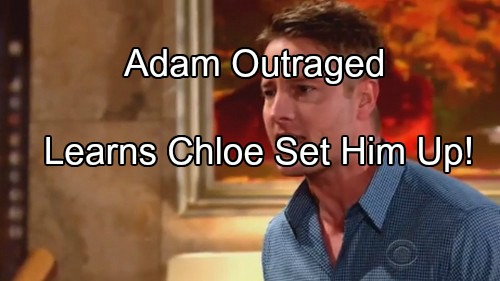 The Young and the Restless (Y&R) spoilers tease that Victor’s (Eric Braeden) accomplice will finally make an appearance in Genoa City on next week’s episodes. Although there hasn’t been official confirmation on the mystery woman’s identity, it’s pretty easy to guess that it’s Chloe (Elizabeth Hendrickson).

All of the clues point in her direction.

First, we had Kevin’s (Greg Rikaart) comment about how Natalie (Mara McCaffray) reminded him of Chloe. That remark foreshadowed the confusion about Victor’s partner. The Young and the Restless wanted it to look like Natalie so they could pull a “gotcha” and make it Chloe instead.

RELATED: Who Is Chloe’s Baby Daddy? Check Out Our Poll!

We also need to remember the fake name Victor’s accomplice used when she signed in at the state pen. “Dorothy Gale” is a reference to The Wizard of Oz, which happens to be the play Delia (Sophie Pollono) performed in just before she died. Delia portrayed the wicked witch on that fateful night.

Plus, we have Victor’s hints about his assistant’s vendetta against Adam (Justin Hartley). Chloe still wants revenge for the hit-and-run accident. Bottom line, there’s plenty of evidence that says Victor’s collaborator must be Chloe.

Of course, Kevin and Chelsea (Melissa Claire Egan) are currently stumped. Too bad they don’t visit CDL for Y&R spoilers! They’ll just have to make sense of this on their own. Fortunately, Chelsea’s suggestion could put them on the right track. They’ll soon be one step closer to solving the puzzle.

After hitting a dead end, Chelsea will propose using a new tactic in their investigation. Instead of beating their heads against the wall over the security footage, they should start thinking about why this person was working with Victor.

Chelsea will guess that the woman is either being blackmailed or has a reason to go after Adam.

Bingo! Chelsea has the right idea. If they consider who has a motive to frame Adam, they could eventually put Chloe’s name on the list. Meanwhile, an anonymous tip will come in at the police station. Dylan (Steve Burton) will be perplexed by the news. He won’t be sure what to make of it.

Could it be Chloe trying to squeeze in some last-minute proof against Adam? Regardless of Victor’s involvement moving forward, Chloe obviously wants Adam in prison. If Victor switches sides, Chloe may continue her efforts without him.

The Young and the Restless spoilers indicate that Dylan will turn to Kevin for help. Kevin is working hard lately. He’s solving more mysteries than Colombo! Dylan will hope that Kevin can trace the call and determine who passed along the tip.

Kevin is getting awfully close to the truth. Will he be the one to figure out Chloe is in cahoots with Victor? Watch for Adam to lose his mind when he learns that Chloe set him up for murder! Don’t forget about Chloe’s secret daughter either. That could be Kevin’s child!

We’ll give you updates on the drama that’s brewing. Stay tuned to Y&R and stop by CDL often for the latest Young and the Restless spoilers, updates and news.