‘The Young and the Restless’ Spoilers: Chloe Goes Public in Genoa City – Visits Chelsea, Bumps Into Kevin and Natalie 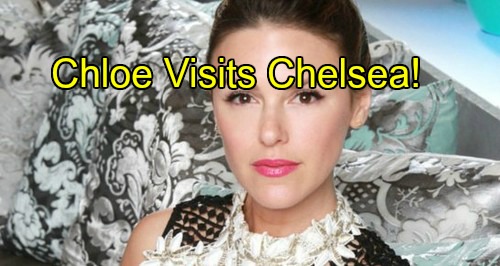 The Young and the Restless (Y&R) spoilers tease that Chelsea (Melissa Claire Egan) will feel like she’s at the end of her rope. Adam (Justin Hartley) is in prison and Victor’s (Eric Braeden) release from prison could be imminent. Life is far from fair in Genoa City.

Chelsea will fear that Victor is going to get away with everything as usual. Meanwhile, her husband is stuck in the slammer for a crime he didn’t commit. Y&R spoilers indicate that Chelsea’s desire for vengeance will grow. Unfortunately, it appears Chelsea’s revenge mission won’t work out as well as she hoped.

It sounds like Chelsea will be in dark place on next week’s episodes. However, an unexpected visitor will soon provide a distraction. The Young and the Restless spoilers say Chloe (Elizabeth Hendrickson) will decide to make her presence known. She’ll show up to see Chelsea and things could get wild.

What’s Chloe up to? Will she just pretend this is a cordial visit and nothing more? Chelsea will undoubtedly think it’s odd that Chloe suddenly chose to drop in. The wheels could start turning. Chelsea might put it all together and accuse Chloe of being Victor’s accomplice.

Of course, there’s a chance that Chloe could confess if she gets backed into a corner. You just never know with Chloe. Regardless, her arrival is going to stir up big trouble.

The Young and the Restless spoilers say Kevin (Greg Rikaart) and Natalie (Mara McCaffray) will also run into Chloe. Will they realize she’s the mystery woman? They’ve been studying that security footage for quite a while. They may notice Chloe’s mannerisms are the perfect fit.

Chelsea, Natalie and Kevin are all going to learn this secret sooner or later. Nevertheless, Chloe has another secret that could create even more chaos. Y&R fans know that Chloe has a daughter she’s been hiding.

Who does Chloe’s little girl belong to? Is Kevin the father or is this Billy’s (Jason Thompson) kid? Either way, we should get some great drama. If Kevin is the “baby daddy,” it would turn his whole life upside down. It might be fun to watch Kevin figure out how to deal with the craziness.

On the other hand, Elizabeth Hendrickson gave a potentially revealing interview with Soap Opera Digest. She suggested that she’d like to see Chloe’s relationship with Billy revisited. There’s no better way to set that up than to give Chloe and Billy another kid together. Once Billy got past the shock and deception, he could bond with Chloe again.

Still, Y&R has plenty of blended families. It’s possible that Chloe’s child could be Kevin’s, but she could find herself drawn to Billy anyway. She might even lie about her daughter’s paternity at first. Besides, Hendrickson’s wish may not be granted. “Chilly” might be a hot mess that’s best left in the past.

Whatever happens, you can bet that it’ll be entertaining. We’ll give you updates as additional news comes in. Stay tuned and don’t forget to check CDL often for the latest Young and the Restless spoilers, updates and news.