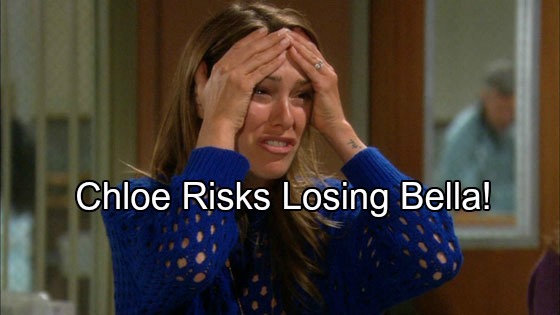 The Young and the Restless (Y&R) spoilers show that Chloe is at risk to lose another daughter and how her own behaviour is ultimately to blame for her tragedies. Chloe (Elizabeth Hendrickson) has behaved recklessly for years. When she returned to Genoa City it become instantly apparent that past mental health issues haven’t been resolved.

Will her ongoing unhinged behavior and refusal to release the vengeance that’s ravaged her soul eventually lead to the loss of another daughter on ‘The Young and the Restless’?

But, after agreeing to help frame Adam (Justin Hartley), Chloe’s choice to withhold the real pages of Sage’s (Kelly Sullivan) journal created avoidable consequences. Victor advised Chloe that he could take her daughter from her if she doesn’t turn over the evidence needed to clear his son’s name.

Loyal fans of ‘The Young and the Restless’ know that this isn’t the first time Chloe’s behavior has created problems. Instead, it’s part of an ingrained personality problem. There are various Young and the Restless arcs where this particular character’s fault lines could be explored, but focusing on the storyline surrounding Chloe’s first-born is most relevant and revealing.

The death of a child would naturally affect any parent. But, viewers of The Young and the Restless recall that Chloe initially blamed Billy’s (then played by Billy Miller) carelessness as the reason why Delia (Sophie Pollono) was killed in 2013. Then, suspect evidence convicted Adam (then played by Michael Muhney) in the court of everyone’s opinion, which sent Chloe on a vengeful path that she’s refused to exit.

An honest assessment of Y&R fictional reality shows that Chloe fails to take full credit for instigating a pattern of self-absorbed, irresponsible behavior that began when she stalked Billy in New York. That preference led to Delia’s life. That choice also spawned the circumstances that eventually led to her daughter’s death.

Daytime dramatists consistently blame everyone else for their problems. However, self-centered personality types don’t want to analyze the past because that’s where logical facts reside. In this instance, Chloe chose to create Delia with a man who she became obsessed with for shallow reasons.

Chloe didn’t pursue Billy because he was prime father material. Then, years later, when Billy left their daughter Chloe and dog Dash alone in his vehicle, poor Delia was run down by a driver who still hasn’t been fully revealed.

Now, as Chloe continues to blame Adam and has turned on Victor, she risks severing ties with Bella. Will this character ever recognize her own faults and begin acting like a responsible person and parent before it’s too late?