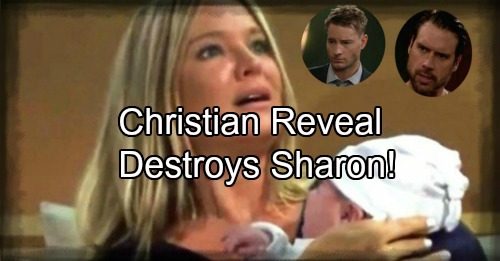 The Young and the Restless (Y&R) spoilers look at what happens in Genoa City after Sully is revealed to be Christian and Adam his father. Christian Newman never died. But, most people in Genoa City don’t know that. Currently, Sharon (Sharon Case) and Mariah (Camryn Grimes) seem to be the only living Y&R characters who are aware that Sully is actually Christian.

But, both women believe that Nick (Joshua Morrow), not Adam (Justin Hartley), fathered this child with Sage (Kelly Sullivan). Imagine the epic fallout be when ‘The Young and the Restless’ unveils the entire shocking Christian reveal!

Let’s start with Dylan (Steve Burton), who’s been cast as a side character in this particular arc. The Young and the Restless spoilers warn that the man who thinks that he’s Sully’s father will be totally devastated when the truth comes out. Viewers haven’t forgotten that poor Dylan initially believed that Chelsea’s (Melissa Claire Egan) son Connor (currently played by twins Gunner and Ryder Gadbois) was his child. Ironically, Sully, who’s actually Christian, is Adam’s (Justin Hartley) son as well.

Sharon is attempting to handle the guilt she feels by keeping Sully from the man who she believes is his biological father, Nick. Her own mental health has been deeply affected from the unusual situation she’s found herself in, which was spurred by the actions of diabolical Doctor Sandra Anderson (Elizabeth Bogush).

Considering the DNA test Sharon secretly paid to have conducted, it’s not surprising that she thinks a Newman man is Christian’s father. However, Sharon didn’t know when she received the result, and hasn’t learned since, that Adam actually has paternity rights.

It’s not yet known if the Christian reveal will be presented in stages – dealing with Sully being Christian and Adam being the lad’s father. If so, Nick might first come to believe that his perceived son is alive. Whether ‘The Young and the Restless’ writers allow Morrow’s character to have time with his child is an important point. Doing so could establish a multi-month buildup to a second reveal, where Adam gains a second son.

As of now, Adam is an inmate at Walworth. So, if the reveal unfolds while he’s incarcerated, a series of poignant scenes could be written where Chelsea brings Christian to him in the prison visitor’s room. Of course, ‘Chadam’ would have Newman heir naming-rights to consider.

Christian is also Nick’s middle name. Therefore, it would make blood sense for Adam to retain Christian’s name. Doing so might also help to repair his own relationship with Victor, at least for awhile. Of course since Victor is responsible for Adam’s current 30 year prison sentence he might choose to name his son Jack!

A major question is if Sharon (and Mariah, who is certainly guilty of the sin of omission) will be exposed for knowing that Sully is Christian and keeping it secret? Will the true circumstances of Sage’s tragic death, for which Sharon bears great responsibility, be revealed? Should Sharon be made to pay for this – many Y&R fans certainly think so! They have had enough of Sharon’s disgusting deception and are tired of seeing her escape consequences for her awful selfish behaviour.