‘The Young and the Restless’ Spoilers: Did Victor Suffer Enough for His Crimes? Vote in Our Y&R Poll 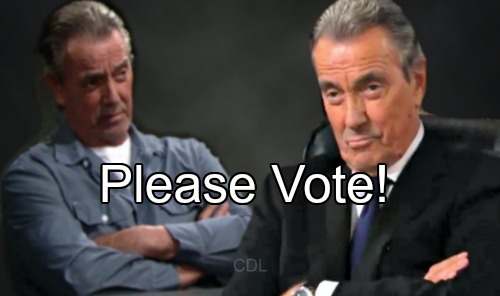 The Young and the Restless (Y&R) spoilers tease that Victor (Eric Braeden) will continue his efforts to get Adam (Justin Hartley) released from prison. Chelsea (Melissa Claire Egan) is furious with Victor and we can understand why! Adam has been framed by his own father. Victor is the guy who truly deserves to be locked up.

That brings us to an important question. Did Victor suffer enough for his crimes? Phyllis (Gina Tognoni) certainly doesn’t think so. She wanted to see Victor rot in prison for the entirety of his sentence. Victor brought a dangerous drug lord into Phyllis’ life. Marco (Peter Bergman) violated Phyllis repeatedly and she hasn’t been the same since the truth came out.

Thanks to Victor, Jack (Peter Bergman) was held hostage on an island by Kelly (Cady McClain). He was tortured while another man impersonated him and slept with his wife. You’d think Jack would still be as angry as Phyllis, but he’s choosing to put all of that behind him. Jack agreed that Victor’s family needed him and urged the judge to let Victor have his freedom.

Of course, Nikki (Melody Thomas Scott) seems to be the only one who’s actually benefited from Victor’s release. Y&R viewers know that Victor tends to do more harm than good for his family. Just ask Adam! He’s stuck in a cell and it’s all Victor’s fault.

Adam’s only mistake was testifying against Victor. He simply wanted his father to pay for his crimes so the Newmans could all be free. Victor couldn’t handle Adam’s disloyalty. He quickly came up with a scheme to teach Adam a lesson. Unfortunately, Victor brought Chloe (Elizabeth Hendrickson) into this mess and she hijacked the plot.

The Young and the Restless has shown Victor threatening Chloe a few times, but he hasn’t exactly been in a hurry to sort things out for Adam. Let’s see less talk and more action, Vic! Guilty Victor is going about his normal life while Adam sits behind bars.

The fact that Victor set Adam up is another reason why some Y&R fans aren’t satisfied with his punishment. Victor obviously didn’t learn anything from his brief stay in the slammer. On the other hand, do we really want him to change? Victor is always going to be ruthless and manipulative. It’s who he is.

The Young and the Restless needs characters who are willing to commit crime after crime. It’s the only way to keep the drama going. Genoa City would be incredibly boring if these people were saints.

Plus, Victor was stabbed during his prison stint. That should count as some suffering. He also took a bullet for Nikki and rescued her along with Phyllis at the cabin. At least Victor did something relatively redemptive.

In the soap world, most characters rarely end up in prison anyway. When you think about it like that, perhaps Victor’s stay was just right. Many viewers were ready to move on and let Victor get back to his old tricks. Let’s hope Victor can help Adam get some good news. Stick with the CBS soap for updates on Victor’s plan.

So Y&R fans, what do you think about Victor’s punishment? Did he suffer enough? Vote in our poll and don’t forget to check CDL often for the latest Young and the Restless spoilers, updates and news.