‘The Young and the Restless’ Spoilers: Dr. Neville’s Exit Looms – Should Mal Young Rehire Michael E. Knight and Save Character? 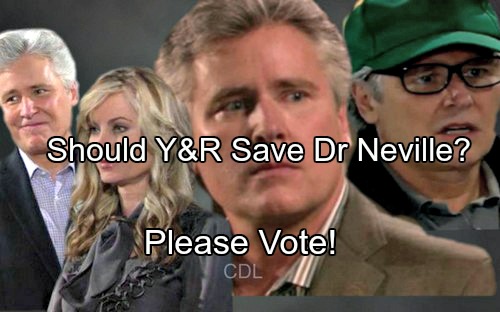 The Young and the Restless (Y&R) spoilers tease that Dr. Neville’s (Michael E. Knight) time in Genoa City will soon come to a close. His onscreen departure is rapidly approaching. Many Y&R fans are bummed about the CBS soap’s decision to cut this eccentric doc loose.

Dr. Neville has certainly won numerous viewers over with his unusual charm. There’s just something about him that’s intriguing and lovable. When Dr. Neville first came on the scene, he was a no-nonsense doctor with a smug attitude. However, things started to shift in the months that followed.

The Young and the Restless gave us a great backstory for Dr. Neville. We learned that his mother fell into a coma and couldn’t be saved. It inspired a young Simon to help others. Dr. Neville’s cockiness was more about showing people the potential of his treatment. He just wants to make a difference in the world.

Once Dr. Neville began helping Ashley (Eileen Davidson), it demonstrated an even softer side. We’ve seen plenty of sweet moments for this pair. Ashley’s love life had been on the backburner for far too long. It was nice that they let her connect with someone new.

Dr. Neville and Ashley just have that special something that makes them work. Knight and Davidson’s easy chemistry has been fun to watch. It’s a shame that The Young and the Restless is ending Knight’s run so soon. We haven’t had a chance to see Ashley and Dr. Neville’s love bloom.

Plus, it’s always good to keep a “Mr. Fix It” kind of character around on a soap. We need someone who can produce miracle cures whenever people inevitably land in the hospital. Anytime a character suffers a brain injury, boom! Dr. Neville can take care of business.

Of course, Dr. Neville’s latest protocol hasn’t exactly produced the results he was hoping for. Hilary (Mishael Morgan) is rapidly declining and Dr. Neville isn’t sure what to do. Nevertheless, Ashley has faith in Dr. Neville and that means we should, too.

Ash wouldn’t lead us astray. If she thinks Dr. Neville can save Hilary from her looming death, then we have no reason to think he’ll fail. The fact that Dr. Neville is doubting himself has been a pleasant touch though. It shows us more vulnerability and that just creates an even richer character. We all like to see some layers.

Let’s hope that Dr. Neville’s exit leaves the door open for a return. If enough fans voice their support, perhaps Dr. Neville could be make a comeback down the road. We’ll let you know if we hear any news about what will take Dr. Neville off canvas. Stick with The Young and the Restless for updates on what’s in store.

So Y&R fans, what do you think about Dr. Neville? Will you miss him and his portrayer, Michael E. Knight? Are you disappointed that Ashley is losing her oddball love interest? Do you think new Head Executive Producer Mal Young should step in and rehire Michael – thus saving the Dr. Neville character?

Chime in with your thoughts in the comments below, vote in our poll and don’t forget to check CDL often for the latest Young and the Restless spoilers, updates and news.