The Young and the Restless Spoilers: Hilary Torn as Scandal Emerges – Victoria Trusts Travis Again – Billy Blows Up at Jill 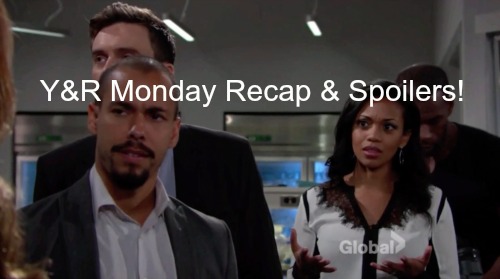 The Young and the Restless (Y&R) spoilers for Monday, October 10, tease that Hilary (Mishael Morgan) will try to rev up the drama for her GC Buzz story. She’ll encourage Victoria (Amelia Heinle) to share her thoughts on Billy (Jason Thompson) and Travis’ (Michael Roark) brawl. Victoria will state that she’s going to let them sort this out for themselves. She’ll be disgusted with the whole thing.

Hilary will suggest that maybe Victoria should intervene if she contributed to their conflict. Victoria will sigh that she’s going to clean up the mess as she heads to the police station. Y&R spoilers say Hilary will start to follow, but her plans will hit a snag thanks to Devon (Bryton James). He’ll remind her that they agreed to lead GC Buzz down a more respectful path.

If Hilary doesn’t kill the story, Devon will pull the plug on the entire show. Hilary will reluctantly agree to shoot a more tasteful version with Cane (Daniel Goddard). Later, The Young and the Restless spoilers say Hilary will get in an argument with her copy editor. Roz will think they should make the story juicy, but Hilary will go along with Devon’s wishes.

The bar brawl footage will surface and Roz will once again push for an entertaining scandal. When Hilary meets up with Devon, she’ll give him updates on the footage. He’ll check it out online and assume that Hilary used it. Devon will get agitated, but Hilary will assure him that their competition was behind the release. He’ll apologize for jumping to conclusions.

At the police station, Billy and Travis will gripe about their current situation. They’ll accuse each other of causing the predicament. Jill (Jess Walton) will show up and try to make Billy’s problems disappear, but Paul (Doug Davidson) won’t go for it. He’ll insist that Billy is an adult and needs to take responsibility.

Travis will talk to Billy about why he clashed with Victoria. He’ll tell the affair story and explain how it got him blackballed. Billy will think it could’ve been worse. He’ll suggest that Victoria is only angry because Travis betrayed her trust. As Victoria appears, Travis will beat himself up for not coming clean at the beginning of their relationship.

Victoria will come forward and offer to pay Travis’ bail. She’ll maintain that Billy will have to work something out for himself. At home, Victoria will urge Travis to tell her the truth. Was he just using her or do they share something real? Travis will promise Victoria that he loves her, but she’ll seem unsure for a moment.

When Travis guesses this can’t be repaired, he’ll head for the door. Victoria will stop Travis and admit that she still trusts him. They’ll move in close for a steamy kiss. At the Chancellor mansion, Jill will contend that Billy’s actions are proof that he still loves Victoria. He’ll blow his top and announce that he’s moving out of the house.

Other Young and the Restless spoilers say Cane and Lily (Christel Khalil) will make love at the office. They’ll enjoy the passion before discussing Jill and the current work drama. Lily will hope that Jill understands how great Cane is. She’ll feel like Cane is doing all of the work while his partners cause trouble.

Meanwhile, the twins will quiz Neil (Kristoff St. John) about his mother. He’ll let them know that she’s in heaven. Lily will come home and discover that Neil was grilled. She’ll be sorry if the kids’ questions were upsetting. Neil will think it was good to talk about his mom. He’ll argue that he has a new point of view. Neil won’t want to take anything in his life for granted.

Will Neil turn the heartbreak into something positive? It seems like he’s already well on his way. We’ll keep you posted as more news comes in. Stay tuned to Y&R and don’t forget to check CDL often for the latest Young and the Restless spoilers, updates and news.

Romance and surprises are front and center next week on #YR! pic.twitter.com/tueFOkGXrr