The Young and the Restless (Y&R) Spoilers: Ian Betrays Both Adam and Victor – Goes Rogue With Own Twisted Escape Plot

BY Heather Hughes on June 7, 2016 | Comments: one comment
Related : Soap Opera, Spoiler, Television, The Young and the Restless 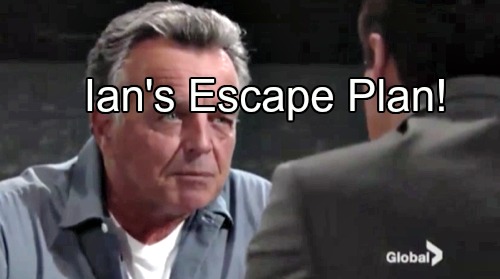 “The Young and the Restless” (Y&R) spoilers tease that Ian (Ray Wise) could have a trick or two up his sleeve on this week’s episodes. Ian seems to be playing for two teams at the moment. He insisted he could help Victor (Eric Braeden), but now he’s made a deal to assist Adam (Justin Hartley). Whose side is Ian really on?

There’s a good chance that Ian will end up playing both of them. He doesn’t have a great track record when it comes to being trustworthy. Adam has no way of knowing that Ian won’t double-cross him. As for Victor, he’s already expressed doubt about Ian and his motives.

Victor is a smart man and he’s not fooled by Ian’s act.

Adam isn’t thrilled about working with Ian, but he’s out of options. A risky opportunity to prove his innocence is better than no opportunity at all. Nevertheless, we’re curious what’s truly in it for Ian. He asked Adam to get him out of solitary confinement to start, but more demands should be coming.

In fact, Ian may not even have to voice those requests. He may just take what he wants – like his freedom, for example.

Since “The Young and the Restless” spoilers say Ian will ask to make a statement in court, he could be staging some type of escape attempt. Y&R tends to let Ian make a break for it every now and then. Ian might turn his little field trip into an extended vacation.
We also have to wonder what secrets Ian might be keeping.

Victor claims he had nothing to do with the murder charges against his son, but Adam obviously doesn’t believe him. What if Victor is telling the truth?

“The Young and the Restless” likes to throw in unexpected twists fairly often. It might be fun if Ian was actually the one who framed Adam. Ian is a pretty resourceful guy. He could have a minion or two out there doing his dirty work.

It would be wild if Adam made a deal with the man who set him up. Ian might be weaving some sort of web to cause strife for Victor and Adam. They’re both probably on Ian’s revenge list.

If he manages to get out of prison in the process, that would be fantastic news for Ian. Y&R viewers usually want this villain to succeed.

Could you buy that Ian knows more than he’s letting on? Stick with the CBS soap for updates on what’s ahead and don’t forget to check CDL often for the latest “Young and the Restless” spoilers, updates and news.