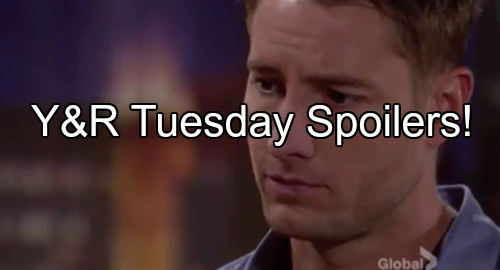 “The Young and the Restless” (Y&R) spoilers for Tuesday’s episode, June 14, tease that Michael (Christian LeBlanc) will give Adam (Justin Hartley) and Chelsea (Melissa Claire Egan) updates on the lab tech. He’ll state that the bribe was connected to Dr. Neville’s (Michael E. Knight) drug trial.

There were no ties to Victor (Eric Braeden) and they can’t prove Sage’s (Kelly Sullivan) diary was forged either. Ian Ward (Ray Wise) is their best hope now.

Adam will want to take the stand to defend himself, but Michael won’t think that’s a good idea. After Adam leaves to meet with Ian, Chelsea will wonder if Ian really got a confession out of Victor. Michael will contend that it doesn’t matter as long as Ian sticks to his story. They just need some doubt in the courtroom.

In prison, Meredith (Alicia Coppola) will be denied access when she wants to drop off pills to Victor. She’ll be forced to write a note instead. Meredith will urge Victor to feign illness to secure a trip to the infirmary. She’ll stare at a picture of Victor while she waits to hear from him.

Ian will overhear and pass along a note of his own. He’ll taunt Victor a little by asking about his family.

At Billy’s (Jason Thompson) place, Bethany (Chrishell Stause) will claim he lets others make his choices. Billy will urge Bethany to go and she’ll bump into Victoria (Amelia Heinle) on her way out. Bethany will allude to Billy’s love for someone else. Victoria will encourage Billy to open up, but he’ll stay tight-lipped.

Elsewhere, Phyllis (Gina Tognoni) will blame her distress on Billy’s foolish romance with Bethany. Jack (Peter Bergman) will be grateful that Phyllis cares about Billy’s well-being. After Phyllis leaves, Bethany will appear. She’ll suggest that Jack must’ve heard the news by now.

Jack will point out that he should’ve seen it coming. He’ll be sorry that Bethany got hurt. She’ll marvel at Jack’s concern for her and let him know that he’s a kind man. Meanwhile, Phyllis will head back to Billy’s house. She’ll confess that she couldn’t spill anything.

Billy and Phyllis will make love, but Jack’s arrival will put their secret in jeopardy. Y&R viewers will be anxious to see if they’ll get out of this jam. Phyllis and Billy will rush to put their clothes on, but they’re going to cut it close.

Other “Young and the Restless” spoilers reveal that Adam will try to get to the bottom of Ian’s plan. He’ll determine that Ian intends on escaping before the trial. Adam will want Ian to stick around so he can testify. If Ian holds up his end of the bargain, Adam may be able to help him out.

At Hank’s bar, Travis (Michael Roark) will find out that someone made his past-due loan payments. When Victoria walks in, Travis will accuse her of throwing money around. Victoria will argue that she had nothing to do with it. She’ll want to know why Travis lied to her about his past.

He’ll admit that he didn’t like the corporate world and he wasn’t pleased to learn Victoria was part of it.

Travis will eventually hint that he was wrong to judge Victoria. He’ll claim his own issues caused the drama. After Travis requests forgiveness, Victoria will agree to let it go. They’ll decide to be a couple and Travis will lean in for a steamy kiss.

Will Luca (Miles Gaston Villanueva) create more chaos for these two? Keep watching the CBS soap to see if Luca will drop any other bombs.