‘The Young and the Restless’ Spoilers: Jack Rants About Phyllis’ Lies and Ugly Secrets – Guilt Grows Over Billy Affair Reveal 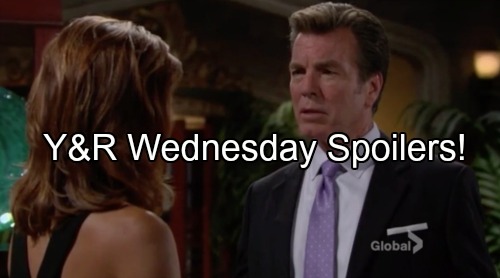 The Young and the Restless (Y&R) spoilers tease that more trouble lies ahead for Phyllis (Gina Tognoni) and Jack (Peter Bergman) on Wednesday’s Y&R episode, August 17. Billy (Jason Thompson) recently told Jack that he was stifling Phyllis. He thinks Jack isn’t letting Phyllis be herself and that won’t provide a healthy relationship.

Unfortunately, Jack isn’t too fond of who Phyllis has become lately. He’s trying to trust Phyllis, but something just feels off. Of course, Y&R viewers know that Phyllis has been keeping several secrets from her husband. We’ll start with a smaller revelation and work our way up to the major shockers.

The Young and the Restless spoilers suggest that Jack will get updates on Phyllis’ plot with Victor (Eric Braeden) and Nick (Joshua Morrow). He’ll confront Phyllis about her claims that she would back off. Needless to say, Jack will be irritated that Phyllis would deceive him like this.

Jack will insist that Phyllis needs to drop all of the lies. If Phyllis didn’t want to listen to Jack’s advice, she should’ve calmly explained that she had to take her own route. Jack wouldn’t have been happy, but at least he would’ve known what Phyllis was up to.

Jack will argue that Phyllis shouldn’t have pretended she was going to stay out of Summer’s mess. The fact that Phyllis lied will be a real problem for Jack. Naturally, Phyllis will have other secrets on her mind as Jack scolds her.

The Young and the Restless fans are patiently waiting on the exposure of Phyllis and Billy’s affair. Jack will undoubtedly hit the roof when he eventually finds out Phyllis was keeping something that huge from him. It’s going to be a devastating betrayal.

To make matters worse, Jill (Jess Walton) got involved. She essentially blackmailed Phyllis into staying with Jack. If that little tidbit comes out, Jack is going to be completely crushed. He’ll realize that Phyllis ultimately chose Billy. She only reunited with Jack because Jill forced her into it.

Bottom line, Jack will discover that Phyllis has been weaving a tangled web of deception. She’s been piling on lie after lie over the last few months. Jack may wonder if he truly knows Phyllis at all. This isn’t the “Red” he fell in love with.

To be fair, Phyllis and Jack were both placed in difficult situations thanks to Victor and his accomplices, Kelly (Cady McClain) and Marco (Peter Bergman). It’s not surprising that they’ve changed in some ways. Jack seems to have lost his backbone and Phyllis is too bold for her own good.

Phyllis and Jack just aren’t on the same page anymore. Can they ever recapture what they’ve lost? Will Jack even want to try once he learns the harsh truth? Time will tell, but the future looks pretty grim right now.

We’ll keep you posted on all the details of the big reveal. The news is sure to shake up Genoa City. Stay tuned to Y&R and don’t forget to check CDL often for the latest Young and the Restless spoilers, updates and news.