The Young and the Restless Spoilers: Jack Shoves Phyllis, Wife Tumbles Down Stairs – Unconscious After Fall As Billy Arrives

BY Heather Hughes on September 21, 2016 | Comments: one comment
Related : Soap Opera, Spoiler, Television, The Young and the Restless 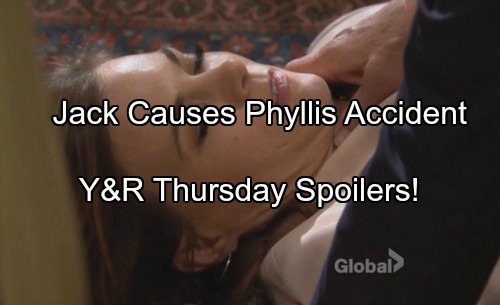 The Young and the Restless (Y&R) spoilers for Thursday’s epsiode, September 22, tease that Jack (Peter Bergman) will get into a fight with Billy (Jason Thompson) after the foundation announcement. Once Neil (Kristoff St. John) and Devon (Bryton James) break up the brawl, Ashley (Eileen Davidson) will lead Billy away. Billy will be irritated with Ashley for constantly siding with Jack, but she’ll argue that Jack has a right to be angry.

Neil will check on Billy later and express some concern. He’ll worry that Billy could be headed down a dark road. Meanwhile, Hilary (Mishael Morgan) will try to have a conversation with Jack. He won’t be in the mood to listen to another cheater. Since Billy is such a lost cause, Jack can’t support the foundation anymore. He’s not interested in making amends with Billy or Phyllis (Gina Tognoni) either.

At Brash and Sassy, Travis (Michael Roark) will urge Victoria (Amelia Heinle) to figure out where she stands with Billy. He’ll feel like Victoria is letting her ex hold her back. Travis will suggest that he should move out to give Victoria some time to work through her issues.

When Nikki (Melody Thomas Scott) drops by later, Victoria will admit that there’s some truth to Travis’ earlier comments. The affair news made Victoria realize that it’s hard to shut the door completely. However, she’ll be ready to do that now. Nikki will contend that Travis is the one Victoria should be talking to.

At home, The Young and the Restless spoilers say Victoria will tell Travis to stop packing. She’ll state that Billy is her past, but Travis is her future. Victoria will maintain that Travis gets her like no one else. Travis will be happy that Victoria wants him to stick around.

Elsewhere, Nikki will dish out some more advice. She’ll insist that Phyllis shouldn’t give up on rebuilding her marriage. It looks like Phyllis will agree. She’ll head over to the Abbott house and beg Jack to forgive her. Phyllis will want an opportunity to get back what they’ve lost.

Jack will tell Phyllis to leave, but she won’t do it. Jack heads upstairs to pack a bag for Phyllis and throw her out. They’ll go back and forth as they climb the staircase, Phyllis pleading with her irate and disgusted husdand. Y&R spoilers say Phyllis will reach for Jack’s arm, but he’ll yank it away. When he does, Phyllis will take a tumble. She’ll end up at unconscious at the bottom of the stairs. Billy will arrive at that moment and demand to know what Jack did to Phyllis. 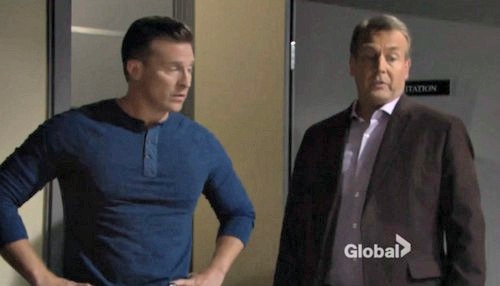 In Friday’s Young and the Restless episode, Billy will call for help while Jack tries to wake Phyllis up. Once Paul (Doug Davidson) gets updates on the incident, he’ll fill in Kevin (Greg Rikaart). This is apparently going to cause some additional strife for Jack. A reporter will let him know about some abuse accusations soon.

Fortunately, Phyllis is going to be OK. She’ll be taken to the hospital and Billy will once again make his case. He’ll believe there’s still a chance for them to be together. Phyllis’ head should be swimming after all of this plays out. 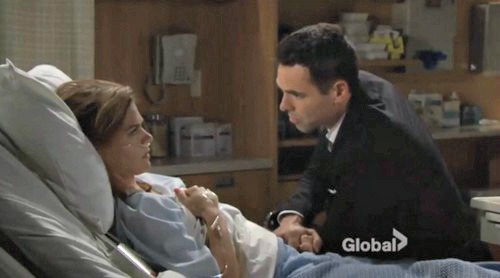 In the meantime, Ashley will clash with Nikki over her guidance. Ash will feel like Phyllis absolutely needs to give up. In fact, she wants Phyllis to steer clear of both Billy and Jack. What does the future hold for Phyllis’ love life? Stay tuned to Y&R and don’t forget to check CDL often for the latest Young and the Restless spoilers, updates and news.