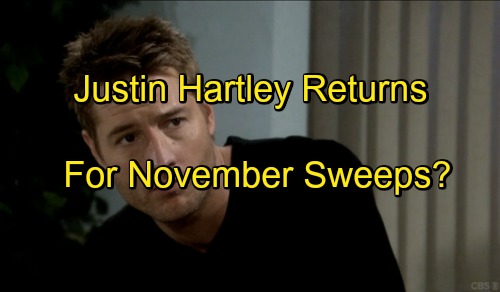 The Young and the Restless (Y&R) spoilers tease that November sweeps will bring plenty of shockers including Justin Hartley’s return as Adam Newman. Now that Sharon’s (Sharon Case) secret has been exposed, the fallout has already begun. Nick (Joshua Morrow) and Dylan (Steve Burton) have obviously been affected by the news. Their lives have been changed forever.

Of course, Chelsea (Melissa Claire Egan) suddenly has a lot on her mind as well. She spoke with Victor (Eric Braeden) about how they should handle the paternity issue. Since Christian actually belongs to Adam (Justin Hartley), Chelsea wondered if it was right to let Nick think he was the father.

They ultimately agreed that Adam would want Nick to raise Christian as his own. Victor and Chelsea don’t see the point of revealing a dead man as Christian’s dad. However, The Young and the Restless spoilers tell us there’s a good chance that Adam is very much alive. We all know that a presumed death barely even counts on The Young and the Restless.

DNA evidence linked Adam to the scene of the explosion, but that could’ve been faked or the result of an injury. No body was recovered and that means we can probably expect Adam to show up someday. The latest Y&R buzz suggests that Adam might even reappear sooner than we expected.

There’s talk that Justin Hartley might reprise his role briefly for November sweeps. It’s possible that The Young and the Restless taped extra scenes before Adam wrapped up his run. It’s also possible that Hartley dropped back by to shoot a few special moments. After all, Adam is an important part of this Christian storyline.

We’re just hearing murmurs and speculation right now, but we can at least hope for a Hartley sighting. Many Y&R fans would love to see Hartley playing Adam again, even if it’s just a glimpse or two. Perhaps Adam could be shown at an undisclosed location.

Since we know GC Buzz will soon air the news about Christian, maybe we could see Adam watching the report online. It would be nice if we could get confirmation that Adam knows his son is alive. It might even encourage Adam to get in touch with Victor. He could explain his wishes regarding Christian’s upbringing.

The Young and the Restless spoilers recall that Adam kept tabs on his family the last time he “died.” Adam might choose to do the same thing this time around. He could keep an eye on Christian, too. Like Victor, Adam tends to accomplish that sort of thing with ease.

Hartley is pretty busy with his new show and he seems to be enjoying primetime stardom. We shouldn’t expect a lengthy Y&R stint at this time. A fleeting Hartley popup would be fun though!

If we have the opportunity to see and hear from Adam once more, it could pave the way for a recast down the road. We’ll give you updates if we hear details about the possibility. Stay tuned and don’t forget to check CDL often for the latest Young and the Restless spoilers, updates and news.