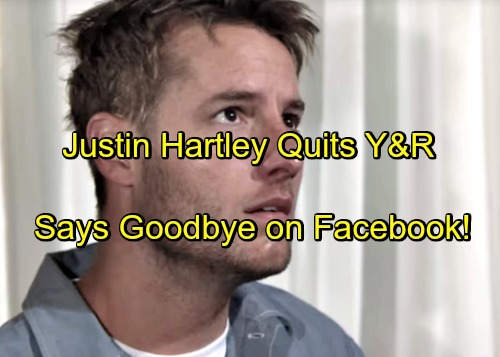 Now that Adam’s death has played out on screen, Hartley was free to confirm what most of us already suspected. He’s moving on! In previous interviews, Hartley said he would try to do both Y&R and NBC’s This Is Us. He confessed there would definitely be a bit of a break at The Young and the Restless, but he didn’t say he was leaving for good.

However, it was easy to guess that Hartley probably wouldn’t be able to take on two leading roles on rival networks. That schedule would just be far too demanding. As much as we love daytime television, primetime is usually what most TV actors shoot for. It’s no surprise that Hartley jumped at the chance to bolt from Y&R.

Of course, Hartley’s time on The Young and the Restless was still very valuable. He gave him exposure and the opportunity to flex his acting chops. Hartley made Adam his own and we’re all grateful that we got to keep him around as long as we did.

The new trailer for This Is Us has been a massive hit. It’s racked up an insane number of views on social media. There’s no doubt that Hartley’s inclusion in the video played a part in that. Soap fans are a loyal, passionate bunch. It’s safe to say that many Y&R viewers will be tuning in to see Hartley portray Kevin on the new NBC series this fall.

The fact that Hartley will still be on our screens somewhere should provide a little comfort. He was quick to point out that this is merely a farewell to the show, not the fans. “Although I am saying goodbye to Y&R, this is not a goodbye letter. I felt it was more important to write a thank you note,” Hartley said.

Hartley expressed gratitude for the feedback he received while he played Adam. Whether it was excitement over a storyline or disgust over a character, it’s always nice when viewers chime in. “You are some of the most loyal and dedicated fans I’ve ever encountered. You are truly the heart of the show,” Hartley said.

Although Hartley is done, we’re left to wonder about the fate of Adam. After all, Hartley was brought in as a recast for Michael Muhney. We’ve certainly seen plenty of actors pass through as Billy, too. Recasts are common on soaps, especially Y&R.

To the wonderful fans of Y&R,

After many weeks of having to keep quiet in order not to spoil storylines for all of you, the time has finally come that I’m able to write you this letter. Although I am saying goodbye to Y&R, this is not a goodbye letter. I felt it was more important to write a thank you note. Each and every one of you helped make my time on the show enjoyable. I always loved hearing about how excited all of you were for certain characters, how disgusted you were with others, at times even mine, or how we were able to help you escape from a hectic day. You are some of the most loyal and dedicated fans I’ve ever encountered. You are truly the heart of the show. It simply does not work without you. I wanted to thank you for that. Thank you for tuning in; thank you for letting me entertain you; thanks for entertaining me, and thank you for caring.

Although I’m leaving the show, you haven’t gotten rid of me. Hahaha…not so fast. I’m beyond thrilled and proud of my new series, This Is Us. We have a sensational cast and crew, wonderful writing and I would be honored to have you all tune in and watch. Here is a preview of what’s to come on This Is Us, premiering September 20th on NBC.

I’ll see you beauties in a couple of weeks!
Justin