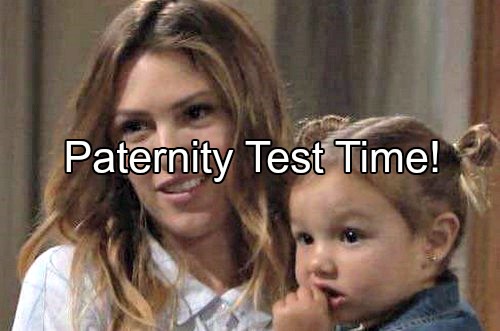 The Young and the Restless (Y&R) spoilers tease that Kevin (Greg Rikaart) won’t be sure he can trust Chloe (Elizabeth Hendrickson). After Kevin showed up at Chloe’s hotel room, she let him in and he had a chance to meet Bella (Cali May Kinder). Chloe admitted that Bella was her daughter, but she was quick to point out that Kevin isn’t the father.

However, Kevin has noticed that Chloe seems on edge. He feels like she’s been keeping something from him. The Young and the Restless spoilers say Kevin will insist that they’re getting a paternity test. He’ll want to know if he needs to be involved in this child’s life.

Chloe will likely attempt to brush off the idea. It’s clear that Chloe wants to keep everything under wraps. Chloe had flashbacks of stealing Billy’s (Jason Thompson) sperm and making love with Kevin. It’s possible that Chloe isn’t entirely certain of which man fathered her baby.

We know that Chloe had sex with Kevin right before leaving town with the sperm sample. If Chloe inseminated herself immediately following her departure, she may have doubts about whether Bella belongs to Kevin or Billy. Of course, Chloe could’ve ordered a paternity test already. In that case, she may be in the loop.

It’s also possible that Chloe didn’t get around to using the sperm sample. She could’ve learned she was expecting Kevin’s baby, which would’ve altered her plans. The sperm sample flashback might’ve just been a reminder to keep us guessing. Chloe only thought of it when Billy mentioned how much she wanted another child with him.

The Young and the Restless is leaving several doors open and that’s probably a good thing. It provides opportunities for twists and turns. Y&R spoilers suggest that the paternity mystery won’t be solved right away. This is going to be a long storyline with lots of depth.

If Kevin forces Chloe to have a paternity test done, that creates a complex situation. What will Chloe do? Will she bribe someone to adjust the results to her liking? Chloe has been doing Victor’s (Eric Braeden) dirty work for months. Her scheming skills could come in handy here, too.

Chloe might make sure the test says Bella is Billy’s child since she so desperately wanted one with him. On the other hand, Chloe might realize that people will think she’s a nut because of the sperm swiping. She could decide to make the results point to Kevin. We don’t know the true paternity or what’s going on in Chloe’s head.

Chloe might even make the test say that the father is some other random guy. To make things even more complicated, there’s always the possibility that someone else could mess with the results. This is Genoa City! A paternity test rarely provides the truth the first time around.

The fact that Chloe is Victor’s accomplice will undoubtedly come into play as well. That should cause total chaos later on. The Young and the Restless has sparked something interesting. The show is obviously building to some epic reveals.

We’ll give you updates as more news comes in. It sounds like Y&R is about to take us on a crazy ride. Stay tuned and don’t forget to check CDL often for the latest Young and the Restless spoilers, updates and news.